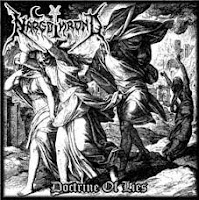 If the multi-instrumentalist Ungod could be paid by the hour for his contributions to black metal, then I imagine he would be quite well off. Nargothrond is another of his myriad, wicked vehicles, and the Doctrine of Lies is his second full-length effort with this project, following a well-meaning but mediocre debut in 2007's Following the Frostpaths of the Hyperborean Landscapes. As usual, the album features his steady, streaming chords and solid compositional ability, with an eerie if standard rasping performance from his compatriot Grimnacht. The material leans towards the threshold of velocity, with a clear but raw production that seeks to emulate the seething emotions of sacrilege that the band wishes to expose here.

If anything is dragging this down, it's simply that there is not a whole lot of variety in what Nargothrond are creating. It's pure Scandinavian black metal with elements of Darkthrone, Burzum, Mayhem and so forth and the Greeks seem content to just stick with the formula. I admire the vicious streak these guys are on here, but only a few of the songs muster a riff that retains itself to memory for even the shortest of spells. "Doctrine of Lies", "Pentapolis" and "Elisha" all blew past me without any recollection, while a few of the other tracks managed to create something more impressively vile, like the twisting and unexpected contours the notes take throughout the opening sequence of "Yahweh", or the gliding melodic textures of the final track "Jesus of Navi". There are ideas here to make a handful of the songs catchy, but they just don't splay themselves out enough through the whole of the compositions.

Like Ungod's other bands Sad and Kvele, there aren't a lot of tunes here. But at least the six provided total up to about 36 minutes. Of that batch, only 2-3 have enough worth to visit back upon them, and the rest just sort of fade into the oblivion of a billion similar pieces. Freaks for Transilvanian Hunger, Prophecies of Pagan Fire, Nattens Madrigal or Opus Nocturne might find the compositions to their liking, with a slightly more even balance to the instruments, but a nicely fuzzy and fibrous tone on the guitar. Unfortunately, they've somehow managed to make this record even less interesting than the debut, and while it functions for a quick fix of the familiar, it's largely indistinct.