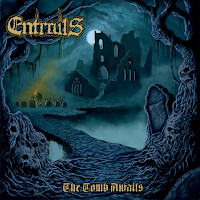 It hardly takes a magnifying glass to scrutinize Entrails' logo and realize exactly who the band has set out to emulate. Yes, The Tomb Awaits, the Swedes' sophomore, is pretty much a direct link to the fertile, restless soils of the first two Entombed albums, Left Hand Path and Clandestine, with a fraction of Carnage and Dismember as parallel influences. Now, to be fair, Entrails were formed over 20 years ago, so they might have a better claim than many to their niche, but it's still difficult to shuck off the irascible reactions one has when hearing so much of this stuff in succession, one of the more inescapable trends in all of death metal. But despite this, I will endeavor not to write of Entrails completely, because this is not some mockery of the form, but a pretty loving tribute.

The band does adopt a massive, crushing tone here which feels much like a Left Hand Path or Indecent & Obscene might damn well have sounded had it begin recorded at this point in the 21st century. A lot of wide open, giant chord riffs with a muted undertow that erupt into the more spurious and mosh-fueled d-beat rhythms that you've heard a zillion times by now. Still, the rich production aesthetics and the band's willingness to include peeps of atmospheric fare amidst the charnel steamrolling of the rhythm guitars goes a long way to creating a rounded and roaring album. The leads in tracks like "To Live is to Rot" and "Undead" offering gorgeous and not expected vistas against the maddening darkness around them, and the vocals of Joakim Svensson pay credit to pioneers like L-G Petrov and Matti Kärki without sounding 100% like a doppelganger. They also pace the album quite well, from the more brooding material into the more ghoulishly uplifting old school death rhythms inherent in "The Slithering Below" or "Total Death".

They've even got some more melodic material ("Remains in Red", "Collection of Cracked Heads") which feels like it moves later into the 90s for influence, comparable to the band Evocation who have been one of the more successful artists in this new wave of old. The resonant production is delivered with absolutely no remorse, and this is one of the more technically impressive sounding records in the entire field to date, holding up through your car speakers, stereo or earphones with unflinching musculature. If you're into the bolder bursts of countrymen Demonical or Feral, for example, then the bold tones here are right up your ally. However, where the album diminishes is simply cycling back to where I started this: this is an insanely crowded field, and aside from the engineering standards, Entrails do not stand out quite so much as the more creative acts like Morbus Chron or Tribulation, in songwriting or innovation. That aside, if you're looking for 100% Swedish adulation, this band has your number, and they are dialing it.