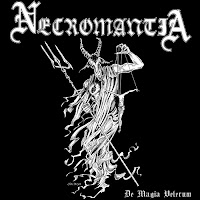 De Magia Veterum is the third Necromantia compilation I'm aware of, and the second I'm covering (since Cults of the Shadow is merely a re-issue of the band's classic albums Crossing the Fiery Path and Scarlet Evil, Witching Black). This is likely only going to appeal to two camps: those who collect everything this unhallowed entity projects, and those fans who have not had exposure to their side of the fabled 1992 split with Varathron: The Black Arts/The Everlasting Sins. Now, that recording was already re-issued in a full length CD format, a fairly mandatory purchase for those into the burgeoning Greek scene of that decade, so De Magia Veterum does come off somewhat redundant. But the band and Dark Side Records have also chosen to include the band's rare 1990 promo tape, which is something most probably haven't heard.

That's not to say that the material there is all that unique, as much was re-recorded for the split or the Vampire Rituals demo (1992), but it's at least an authentic glimpse at the grimy roots of their original take on the black metal medium. "The Feast of Ghouls" is here in its original form, "Family of Dog" with its creepy, lurching organs, distorted black/doom bass and overbearing vocal slather. And then, of course, you've got the nearly 10 minute length "De Magia Veterum" itself, an unnerving if messy experience which seems like having imps gnaw on your brain as you are interred in the middle of some sorcerous orgy at a cemetery. More sparse, ghastly and atmospheric than even their masterworks. Most of the tunes, though, are mostly unchanged for their later editions, so there's just nothing new if you're familiar with their back catalog. The split material here is just the original four tracks, without "De Magia Veterum" added (it was on the full length album re-release), but since you've already got that as part of the promo, it's not a huge loss.

Anyway, De Magia Veterum is somewhat crippled by the lack of new material or rare outtakes, perhaps from their studio efforts. Like so many fan comps, a more complete package would have heavily ramped up the value. Why not throw in the '93 demo, for example? Or a repressing of the limited 1995 EP From the Past We Summon Thee? Label rights were probably the issue, mind you, but still it feels like just another slim pickings that is only worthwhile for those who are desperate to hear early recordings that were mostly included with later releases. I'd also advise interested parties to head straight for the Black Arts Lead to Everlasting Sins re-issue over this, since the Varathron contribution is pretty good.