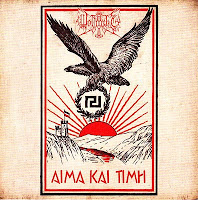 Wolfnacht's Aima Kai Timh is probably the most racially charged record of Athalwolf's career, and it's made even more prevalent due to the use of English lyrics, something he has only flirted with in the past but takes center stage upon this brief release. I was concerned at first that he'd be headed straight back into the RAC rock influence that was present on a few of his past works (Night of the Werewolf EP, Töten für W.O.T.A.N.) which I had never really cared for, but this is still straight up atmospheric black metal similar to his then latest and greatest album, Zeit der Cherusker. The one possible concession here is that the vocals he uses are primarily a sort of grimy median between cleans and his usual black rasp, so it feels a little unique (though he's messed with these vocals in the past).

Anyway, this is an artist whose quality has fluctuated between releases, generally hitting his heights when he's writing a more direct brand of black metal (Heidentum) or a more glorious, symphonic variation (Zeit der Cherusker or his Zofos side project). The two tracks here didn't seem to move me in either one direction or the other. There are still a lot of organ and synth lines, and he's improved his drumming here, which feels expressive and constantly shifting to collide with the tremolo picking and orchestration, but very few of the actual melodies present have that same, inspiring quality as the prior full-length. The ringing guitar intro to "The Night Before the N.S. Revolution" seems to imply an eeriness that is not capitalized on with the rest of the track, which is largely mid-paced and forgettable melodic black metal. The other track, "The Dawn of the N.S. Revolution" is more desperate and accelerated, and the vocals are a bit better, the blend of synths and guitars more flush, but ultimately I wasn't so impressed.

As I don't associate with Wolfnacht's ideology, the lyrics don't hold a lot of interest for me, but I can understand how the angry pro-Aryan crowd might appreciate that they're presented brazenly in English, a language that simply more people speak than German. What it really comes down to is the music, and Athalwolf has written better in the past, though it's good to see that he's remaining firmly in the black metal camp here. Aima Kai Timh is an extremely limited recording, with only a few hundred 7" in circulation, but those into his Zeit der Cheruskers or Dawn of Heathens albums might want to get their paws on it if they can find one. As a starting point though, I'd much more recommend one of the two full-lengths I praised in the second paragraph.