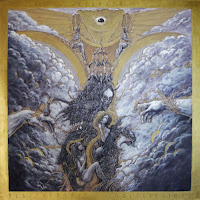 Try and envision a world in which Deicide wrote much better music than they normally do, and incorporated Polish strength blasting and a bit more flashy, thrashing aggression in addition to splitting the layered vocals down to just growls and snarls (and usually not at the same time). This is a world Azarath not only have envisioned, but have manifest into reality for 13 years and five full-lengths, the latest of which is Blasphemers' Maledictions, a brutal execution of dead center production values and rampant, neck snapping anger which leaves but the chalk outlines of corpses in its wake. This would be enough as is, for most folks, and yet they've also seen fit to pen riffs that are actually worth a damn.

Azarath are essentially something akin to a burst of machine gun fire given flesh and sentience and then reared on classics like Legion, Altars of Madness, Covenant and The IVth Crusade, and they enforce such an unholy union with the tireless exertion of well oiled clockwork. They don't write 'interesting' metal, but what they do write is sheer, muscular punishment which gets by on its physical prowess alone. There are intricate compositional choices running through tracks like "Crushing Hammer of the Antichrist" or "Behold the Satan's Sword", but these tend to manifest in steady streams of rapid fire mutes that cascade off in rhythmic accordance to the insane blast work of mainstay Inferno, or against the cyclic melodies that the guitars cast into the necrotic atmosphere for an added layer of depth. In fact, all of the musicians are insane, with the possible exception of the bass, which is present, but often drowned by the frenetic beats and riffs.

Even the lead shredding is mature, methodic and melodic, never wasted on needless squandering of resources, but fitting fully into each precise, hammering edifice like...again...clockwork. But wait, there is more! Blasphemers' Maledictions, as forceful as it stands, also offers a fair share of variation, like the creepy and wide open intro to "Under the Will of the Lord" or the even more hyper-spastic velocity of "Holy Possession". The only real negatives might be that the album can become exhausting in short order...even just THINKING about how much energy is asserted; or the fact that, while percussive and efficient enough for the music, I do often wish that there was more atmosphere to the vocals. Sometimes they'll lay on a growl with some reverb, but I just want this to happen more...the majority of Necrosodom's barking seems all too typical for most death or black metal acts with higher budgets.

Those quips aside, though, Azarath's newest is a block busting spectacle of which proves once again where the world's masters of extremity belong, and fans of other blackened death acts from Poland (Behemoth, Hate, etc) might wish to make this a mandatory purchase.