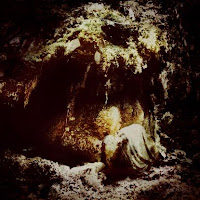 Washington's Wolves in the Throne Room are another constant in the dichotomy of US metal love/hate, with a wide crowd of supporters who ingest their laconic but competent compositions through a hazelnut haze of lattes and environmental rallies, and an equal amount of witch burning purists on the opposite spectrum who think they're the biggest bane to the black metal genre since kids started playing PhotoShop with Immortal. Personal politics and preferences aside, my opinion stands somewhere in between the extremes. I've always found the writing of their back catalog to be underwhelming. They'll build this obscure, longing atmosphere with a quality riff or two and then leave the listener sitting around twiddling his or her thumbs waiting for some revelation that never arrives. Diadem of 12 Stars and Two Hunters both had a pinch of potential, but I've felt no impetus to return to them.

Sadly, this same, vapid miasma permeates nearly every moment of their fourth full-length, Celestial Lineage. Aesthetically, this is a beautiful looking piece of work. I love the cavernous appeal of the cover art, the implied growth and contrast of light and shadows. I like the band's undercurrent of naturalism, which is heavily manifest through the lyrics. The band has often been accused of its preachy environmental messages and snide superiority complex, but I like that their words actually 'show' the imagery rather than just telling it. They're fairly poetic in their ability to conjure up simple and effective visions, and their obsession with mixed images of nature and death seems to fit the modus operandi of the music itself. Celestial Lineage is also a pretty clean record, with multiple layers of texture delivered through the guitars, vocals, and the thin layer of ambiance affixed to much of the play-length.

The problem is, that once you've stripped the actual writing and polish of the record of their numerous eccentricities (ambient synths, female vocals, drifting shoegazer undertow), you are left with a decidedly uninteresting and unassuming slab of mediocre black metal. I'm not sure how a band can write such a work of atmosphere and variation and come up entirely short of memorable songs. They'll surge between walls of tremolo blasting melodies and slower, steadied, gleaming non-euphoria, and yet there isn't a single guitar riff on the album which I felt any desire to repeatedly experience. The vocals are dry and dull, expressing neither the menace or scathing emotion I enjoy within the medium. And worse, this is yet another of those bands who seem to think that swollen song lengths evoke some sort of esoteric Elysium for the art-starved, and thus you've got three here, ranging from 10-12 minutes which deliver nothing more than numbness and tedium (and not in a good way).

Wolves in the Throne Room have a good eye and ear for the aesthetics of abandonment and isolation, and I'd be the last person to deny that they've thought this material through. Alas, I could make no existential connection to this music. The Enya-vocals ("Astral Blood", "Thuja Magus Imperium", etc), the acoustic segues, the scaling and declining streams of tremolo bliss, and the depth of desolation should all lend themselves to something transcendent and transitory, but like a jumbled mix of alphabetical letters in your cereal, they just don't seem to translate into actual words. No riffs or rhythms to really absorb the listener, and the bulk of the content is indistinguishable from the wealth of other mediocre black metal, save for the lack of flamboyant Satanism, sadism and suicide. It's not an offensive or 'bad' record in the slightest, but the lyrics were about the only thing that could keep my attention.