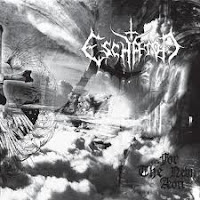 Whatever doubts I might have about a band like Eschaton's ability to distinguish itself from the massive flock of European black metal unknowns who spawned from the gene-sludge of hero worship to produce forgettable, efficient audio libations; there can be none as to the Greeks' utter proficiency for penning forceful hymns of abrasive desolation, intrinsic melodies within a swollen, grating mix. ...For the New Aeon is a limited press 7" release following up the band's 2006 debut Causa Fortior, with only about 300 copies in circulation, so it's unlikely most will ever get the chance to hear it, but certainly it's a loyal and focused continuation of that same unbridled, noisy and tempest-borne aesthetic of night-summoning turmoil.

With only two songs, one cannot expect much, and yet the EP just about matches any pair of tracks plucked randomly from the full-length before it. "Radical Madness" is a storming charge of blasted beats which gradually transforms into a slower, atmospheric crawl; while "Arises an Empathy" has a brighter, mid-paced nature with a load of glinting, depressing strikes higher up on the fretboard, eventually picking up to a majestic, swaggering march circa late 80s Bathory. Neither is exactly endowed with the most memorable of guitar riffs, yet the competence of their execution and the sheer density of the atmosphere, with rasps, drums and guitars set all about even in the mix, is enough to maintain Eschaton's stride without furthering it.

Ultimately, ...for the New Aeon does get lost in the unheard screams of thousands throughout the underground, but black metal collectors will probably appreciate the beautiful black and white art, and the band's grim, abusive consistency. Melodic and dynamic to the point that they sidestep the suffering of monotony, and lyrically engrossing, but still leagues away from the top tier or similar, Scandinavian artists that the genre produced over a decade prior.