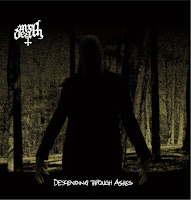 It's pretty easy to just write off Mr. Death as another of the tide of Entombed and Dismember clones that are literally pouring out of every fucking surface on the planet, but they've made a few choices for their band that help them stand out slightly from the usual flood of d-beat doppelgangers. The whole 'serial killers in suits' things that they use for a gimmick in their pictures and live gigs creates a sort of American Psycho meets Wolverine Blues aesthetic which is a lotta fun, and their actual songwriting tends to focus more on grittier, grooving and crushing force than a complete knockoff of Left Hand Path like so many other bands I've heard these past few years. That said, though, I wasn't blown over by their last release, the Death Suits You EP, and I'm not much more impressed with their sophomore full-length, Descending Through Ashes.

For one, while I can appreciate the sheer weight of the guitar tone, so loud and dirty that it threatens to blow out your speakers, it does not necessarily acclimate itself to exciting song writing. I mean, the sheer visceral might of a track like "Your Final Demise" is difficult to deny, they play enormous (if crude) riffs with a lot of inherent groove while the vocalist howls off in the distance doing a decent stint in the death & roll niche ala L-G Petrov. But they just don't write riffs with the same level of menace and evil as most of their influences. "Another State of Decay", "Bloodfalls", and "The Plague and the World it Made" all churn the listener's brain into butter, and they do one-up a lot of their peers in heaviness alone, but this is more a measure of the actual volume of the instruments than the strength of the songs. Also, a few of the songs definitely sound uncomfortably similar to Entombed during the Wolverine Blues era ("From the Valley of Defilement", "Descending Through Ashes" itself) with a samey, chugging gait, which would be easy to overlook if they were really good, but they're not.

At any rate, if you're a sucker for this colossal, crushing Swedish tone, than Mr. Death give you that on overdrive. If you want to zombie mosh until your fists are bruised and you suffer an embolism or arterial rupture, then you could do a lot worse than Descending Through Ashes. But part of the reason I am so fond of this niche of the death metal genre is for its grave-born, diabolical underpinnings, and these guys are more about the actual muscle of the undead rather than the chill, spectral intimidation that you'll find on the classics. That's not necessarily a weakness, mind you, but with guitars so overpowering I would really hope that I'd better remember the notes they were playing, and that's just not often enough the case here.