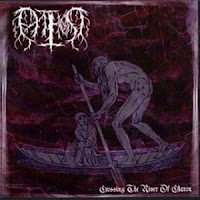 That Crossing the River of Charon comes off so vapid is a bit of a shame, as there are certain dressings to the album that actually feel rather unique. I'm primarily referring to the lyrics, many of which have been written in Greek, which is something one does usually not encounter even in the field of mythological themed black metal. But I also rather liked the intro, with its mix of high pitched choir synths and garbed, rasped incantations, and prayed that it might lead into one bulldozer of a fucking album. Instead, Kerveros has conceived a rather straightforward and monotonous affair which, neither execrable nor inspirational, drifts all too soon into the Lethe of the conscience, a middling effort which feels a bit too mechanical in its execution.

The drum machine is responsible for much of this, since it seems a bit too obvious in the mix, but the guitars and bass riffs also seem to loop well beyond their welcome in the majority of tracks, and they also take on a rather robotic, phoned in feeling throughout the title track, "Elysian Fields", "Persephone" and so forth. As evidence of just how much the ear hunts for some relief or contrast from the album's derivative structures, the various bridges and breakdowns stand out even farther than they normally should. For example, the synth/acoustic interlude in the title track after the 3 minute mark in the title track creates a welcome, mesmerizing calm that I did not want to let go of, or the escalating, melodic bridge in "Deep in Darkness". The problem is of course that these moments are greatly outnumbered, and while the various tremolo melodies are preformed competently, they and their blasted foundation feel pretty bland.

The production is pretty standard, with a thin but efficient guitar tone over the rattling of the machine beats, and a plodding but present bass tone. The rasps are actually not so bad: Kerveros is good at drawing out and intoning his native tongue into horrific howls, but then his style is really quite common for the genre, outside of the lyrical linguistics. If compared to the previous Athos record The Awakening of Athos, the style comes off quite level, but the songwriting here seems a bit too streamlined, monotonous and indistinct to capitalize on the mythological motifs that really could use some more metallic attention. Crossing the River of Charon is ultimately just another corpse-painted chip off the old block, formulaic and forgettable, tragic in that it could have been much, much more if the composition could live up to the admirable Hellenic vision.