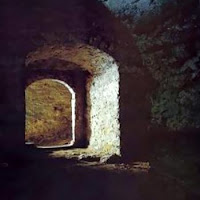 Though they're listed as an 'active' band, Stardrowned remain a purely obscure, underground Hellenic fixture with very little output to their name. Even Fathergods, their album-length release, is a compilation of demos from a decade before its release, but I feel that the material here is interesting enough to warrant some mention. What Stardrowned execute here with some competence is a hybrid of the melodic black and death metal genres, comparable to their countrymen Agatus but with a decidedly Swedish flair that brings to memory the output of bands like Dissection, Lord Belial and Sacramentum. Death grunts are barked out over streams of dual tremolo melodies, often majestic and swaggering over double bass hammers akin to Amon Amarth.

Not quite so ponderous as the simple dichotomy of shadow and light on the cover's tunnel arch, this is actually more of a fist pumping, riff-centric fusion of genres which probably never drew much interest as the style was highly visible and prevalent in the 90s (when most of this stuff was conceived), and the Greeks are not particularly great at it. I could have seen this material coming out through the Invasion or Regain label some years in advance of its collected state, but alas they were just too much of an X factor. However, they're pretty ace at coming up with nice flights of speed riffing with an almost melodic thrash foundation, as in "The Rise of the Father Gods Cult" or "The Lust of Our Sins", and can even sling out a decent breakdown or two without feeling too contrived or allowing their compositions to collapse into tedium. The vocals don't really do much for me personally, perhaps because they have too much breadth over the thinner guitar tones....but that being said, these are demos, so one cannot expect a high standard for production.

They do stand out somewhat among their Greek peers since there weren't a whole lot of them crossing the streams like this, but very few bands have succeeded in this niche in the long run (Dissection were huge once, and Amon Amarth continues to flatten the world). Fathergods will at least rate some interest if you're into that whole late 90s scene in Sweden, anything from the earlier A Canorous Quintet output to Decameron to the aforementioned, simply due to the focus on galloping, slightly memorable guitars, but everything else is average at best, and it's not of much use to those who don't possess an erstwhile curiosity for the niche.