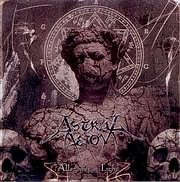 From the wonderfully developed instrumental intro "Necrologue for the Immortals" to the vicious, textured velocity that ensues, it is clear that Greeks Astral Aeon are striving for something just beyond the grasp of the derivative black metal hordes continuing to overpopulate their medium into the 21st century. Well produced, taut, intense, and highly proficient, Allegories of Light immediately draws the imagination back to the halcyon days of the Norwegian scene, or rather the mid to late 90s, when bands such as Odium and Limbonic Art were adding an even more symphonic spin to the formula laid out by Emperor on In the Nightside Eclipse. I can't promise that Astral Aeon are writing the most infectious rhythms plausible here, but they ably ensure that the listener's attention remains affixed from one track to the next.

As I mentioned, "Necrologues..." is quite wonderful on numerous levels. Pianos, eerie backing synthesizers, garbled samples and crashing industrial percussion gradually escalate to the boiling point, at which the guitars of "The Bridle of Corinth" explode over a precision blast, while the bass slowly shifts itself around to provide a melancholic subtext, and the vocals sneer like a total hellcat; a fallen angel ascending once again to breach the pearly gates. Yet, amidst this furor, the band manages to sprinkle on some almost 80s pop, pretty synthesizers into the chorus for an amusing and memorable contrast. And beyond this, the tracks continue to blaze trails into the cosmos, from the dense, mid-paced strut of "Illusion of Lycius" to the choir-driven astral beauty of "Lunar Doctrine"; from the thrashing intro of "In Veinly Travels" to the glorious, 8 minute finale "Damnatio Memoriae". Each contains a wealth of dynamics, strong guitars and keyboards and that reliable, heaven-scouring rasp.

Allegories of Light is not immensely original, mind you, since everyone from Dimmu Borgir to Hecate Enthroned had carved a path in this niche a decade in advance, but the ambition is clearly present, and the rewards are many for those into the style. I enjoyed the lyrics a great deal, all hearkening back to Hellenic mythology and antiquity and well written to match the surging emotions of the music. What male and female choir vocals are used feel flush with the backing instruments, and you never once get the feeling of the album being overwrought or cheesy. The tones are bright and loud, and it's glaringly evident that the band took a good deal of time to arrive at these compositions, honing each to flow effortlessly into the next and provide a consistent, aether-worldly experience. If you're into the symphonic Scandinavian black metal records of the 90s, then you absolutely want to hear this.

Verdict: Win [8/10] (surrendered to the moments of immortality)