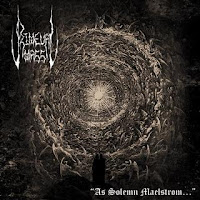 There is nothing remotely 'solemn' about this maelstrom, but that fact does not entirely render it inert or ineffective. Primeval Mass is another of those side projects of an underground Greek act, in this case Orthanc of Eschaton (who I have yet to be impressed by). The sound here is more storming and tangible than that other institution, but you certainly wouldn't be disappointed to cross the streams from one to the other. Primeval Mass had itself already existed for nearly a decade, so it's not as if As Solemn Maelstrom... is some sudden manifestation. Thus, one should not expect an amateurish offering, but a competent tribute to chaos that blasts away without abandon as it vaults itself into the firmament to wage war against the light.

To that extent, it has its weaponry: a hefty share of blasted drums, and a pretty wide array of fibrous, deadly riffing that spans from the expected tremolo melodies to surges of thrashing undertow or stop/start chords resonating against the implied darkness. The guitar passages are not the most catchy sort, but fans of De Mysteriis Dom Sathanas and In the Nightside Eclipse, or Swedish bands like Marduk and Watain would feel right at home with the sky shattering hostility of "From the Crypts of Outer Chaos", "Burial Anthem for the Undead" or "Blackened Sky Upon the Mournful Throne of Suicide". But they're not exactly a one trick pony, there are ambient and symphonic pieces here like the intro ("Through Passages...to Pantheon"), guitar tinged outro ("Elegeion to Chaos Atermon") or the superior interlude ("Catachtonium") with its brooding ritual whispers and swells of atmosphere. These help to break up the monotony of the primal, thundering discourse.

Still, though, As Solemn Maelstrom... doesn't really stand out all that much. It's marginally more intense and exciting than the Eschaton full-length Causa Fortior, and reliable in its level of aggression and acceleration, but the black metal content here feels like yet another 'also ran' striving for a piece of the primordial pie. I can't question the competence or evil underpinnings, but outside of the sheer speed and violence with which the band performs, the notes never seem to adopt the menace many demand out of the genre. Primeval Mass have quite a lot going for them...I love the cover art, I love the band's name, and their balance of the ambient and black metal poles, but there's not much impetus to choose this over its influences, and there are a good number of Northern European bands who do the same thing but better. But if you're keen on, say, a more atmospheric take on the Mayhem and Marduk formula of the mid 90s, then As Solemn Maelstrom... is something you might wish to experience at least once for yourself.