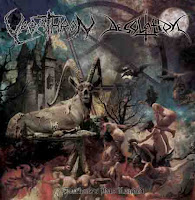 Darkness Has Landed sees a natural team up of the Greek legends Varathron with another long-standing Hellenic band (Desolation) which performs with a brand of death metal not unlike Deicide or Vital Remains, with some thick, thrashing riffage. The cover here looks enticing, a pagan ritual of seduction and sacrifice under the watchful goat and its horns, but the music is unfortunately not that great from either party. No big deal, really, since there were only about 500 of them made and most will just be experiencing the music through the internet.

Varathron can certainly survive this, and their piece is the better of the two, a vicious atmospheric black metal track called "To Thou Who Condemn the Light" with full, deathlike vocals and an air of that classic Greek atmosphere from their earlier albums like Walpurgisnacht (or Rotting Christ). Once it surges into the speed metal licks at its core, and the grandiose atmosphere of the final minute, it really starts to shine like their great Stygian Forces of Scorn album (the same year), but it feels a little tilted towards its latter half. As for Desolation, well, this is a band that have existed since about 1991 in various forms, but never really released anything until theri 2006 effort Eternity of Hell. And now they're back on hiatus. They once had members like Sakis Tolis in their ranks, plus a bunch of dudes from other Greek death metal bands. This song is wholly average, and it had already appeared on the album of the same name...

If I can say something good for them, it's that they offer a lot of variation. The acoustic intro transforms into a pummeling blast beat with melodic speed rhythms under ghastly growls, and they go into a few walls of melody near the bridge (one nice dual muted descending pattern at about 3:00 doesn't rescue it). But nothing really stands out here, not the vocals nor the riff selection, and I'm afraid "Eternity In Hell" is not about to win the veterans much in the way of an expanded fan base. But it's not bad, and the production is pretty tight. At any rate, the coupling of these tracks is sort of a given, since they flesh out a similar expanse of atmospheric territory, but the quality of the former and redundancy of the latter don't make for an engrossing experience, and the cover feels superior to the musical content in the end.