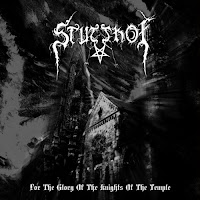 For the Glory of the Knights of the Temple is a highly limited 7" EP released through Zyklon-B Productions. It does not actually feature any new Stutthof material (since the band was content to move on to their newer project Acherontas), but a pair of tunes that were penned around the time of their sophomore album And Cosmos from Ashes to Dust (2004). I was not quite a huge fan of that period, as I found the band to be a middling Hellenic approximation of their obvious Scandinavian influences like Emperor, but nor was it the most incompetent stuff of its sort. I'm afraid that, had these tracks been released back then, it wouldn't have made much difference, because they're not exemplary, but certainly they are on par with anything from the first two albums.

There are two parts to this "For the Glory of the Knights of the Temple" saga, with the first being "The March" and the latter "The Fall". The former is accurately titled, because it is a straight charge of blasted black with streaming, thick tremolo guitars cast beneath the towering rasp of Acherontass, with a few varied riffs that keep up the momentum and become gradually more intricate neared and after the bridge. The latter is naturally the more atmospheric, since it's a pure keyboard ambient piece, but nice enough for that style. Seeing that the band has lifted soundtrack scores directly onto previous releases, it's hard to be sure that it's original, but despite the choirs and vibrant atmosphere, it seems like something they could easily have composed.

Like most of these rare pressings, there must be under a 1000 of these EPs out there in circulation, thus they were never intended for mass consumption (no Stutthof releases ever were). I can't see myself listening to this again anytime soon, but for what it is, you could ask for worse. The production is just as rounded as anything they released previously, but I'm more a sucker for what they are doing in Acherontas, a far more dynamic and compelling entity.