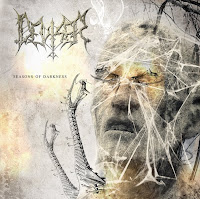 It's great to have a band like Deviser getting back into the game after nearly a decade of absence. After all, these guys were once one of the more promising of the second tier Greek acts, at least for their first two full-lengths Unspeakable Cults and Transmission to Chaos. That said, this is not a group that has ever necessarily clung to one particular sound, instead balancing elements of black, death, thrash and Gothic metal into something striving towards unique, but not always the most fulfilling. Running Sore, their 3rd album had been a letdown, but if you thought the band might one day return with all guns firing, well that's not exactly what has happened here. In fact, the Deviser logo these days, which still seems pretty black metal, is honestly misleading.

Seasons of Darkness is by far the cleanest produced of their body of work, which makes sense with the level of technology available today, but it's much more of a straight Gothic metal effort with hints of electronic and doom than any of their previous full-lengths. You can definitely hear a bit of the lighter side of Rotting Christ and Septic Flesh in this record, perhaps a bit of late 90s Moonspell, but the band also spice it up with a lot of flowing, proggy synthesizers and a constant sense of variation. Something like "The Cell" will open with a driving wall of melodic rhythm ala Katatonia, and then utter forth the Gothic whispers and keys into an almost poppy, Billy Idol-like tune, and then the next track "Dreaming Madness" will tease us with some modern thrash rhythms before doing the same. Don't get me wrong, this is a well written record, with each song delivering its wrath and payload with clarity, but it's without question their safest and most accessible effort to date.

Favorite moments here probably included the airy, fulfilling choirs and leads of the doomy piece "The Eight Veils", or neurotic, Gothic prog metal of "Talking Pictures", but it's fairly consistent throughout the 43 or so minutes. In truth, there is nothing here on Seasons of Darkness that wasn't already hinted at with one of the prior efforts like Running Sore, they've just decided to hear to lay low on much of the aggression of their formative years, so aside from a few heavy riffs or black rasps one should expect nothing more than a modernist, very Euro Gothic metal record with all of the flourishes of high end digital production and synthesized atmosphere. When it doesn't work (i.e. the "MMXII" intro) it comes off a bit cheesy, but where it does it's competent enough that fans of the deep vocals and melodic orchestration might get into it. I just don't hear enough of the 'catchy' in here that I'd usually expect from such a piece.