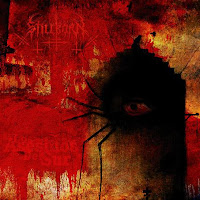 Poland's black metal exports are very often known for their intensely punishing speed and violence, often able to out-muscle even their Scandinavian influences and their more prominent, local death metal peerage. Acts like Massemord, Thunderbolt and Besatt stand surely among the more harried and brutal of the age, even if they remain heavily bound to the underlying traditions of the medium; and such traits can certainly also be attributed to another of the scene's veterans: Stillborn. Yes, the band which has made a name for itself with its Spanish album titles, but also a formidable bevy of brutes whose fourth full-length, Los Asesinos del Sur, expands into a more tactile, flexible amalgamation of the black, death and thrash genres.

This album is not just a beast to experience in its audio form, but also incorporates the surreal and terrifying works of a local Polish artist (Kamil Kukla) into one of the more fascinating visual packages I've witnessed in some months. Grotesque and unforgettable maps and mutations of the flesh, from the eerie, spidery eye which emerges from the arch on the cover to the carnal copulations of limbs and muscles which accompany the rather fucked lyrics within the booklet. But all this wretched candy would mean nothing if the music itself were not ugly enough to do it justice, and I promise you: it fucking is. The hugely organic, honest guitar tone almost conjures comparisons to how unusual it felt the first time I listened to Reign in Blood, South of Heaven and Season in the Abyss when they were first released.

The gang shouts and grisly, central death and rasp vocals give the impression the listener is being cornered in some rank, stone alley and about to be beaten limbless with blunt objects, a feeling I've rarely experienced outside of December Wolves' Completely Dehumanized or the past few albums from Denmark's Horned Almighty. But fear not, all of the hallmarks of the straight and sinister black metal are still present, including vibrant and dynamic blast beats ("Hymn of Destruction", "Antonym", "Stillborn II") or slower, percussive grooves in the vein of earlier Morbid Angel ("Kot Wolanda", "Los Asesinos del Sur"), or even a few pieces that just thrash out like catapults of razorblades ("Son of the Holy Motherfucker").

Whats more, each track is in of itself a work of thuggish, wrenching dynamics that keep the ears attuned even when individual riffs might come up shy of perfection, and clearly the band is reaching for something more sporadic, natural and enduring than previous albums like Manifesto de Blasfemia. It's not necessarily hinging on the avant-garde, like a Furia, but its inherent ugliness and lyrical psychosis are sure to thrill fans who are sick of the same, stagnant blasting monotony and corpse-painted theatrics. Los Asesinos del Sur feels fresh, like a recent kill on the butcher block, cuts agape from where the organs were removed, gamy scraps and lines of drying blood everywhere, eyes open in shock, damning each lucky, living beholder to a considerably bottomless pit.