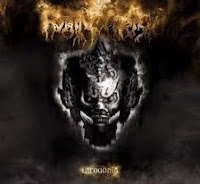 After years of fiddling with their base, 90s formula, exploring exotic new vistas of Gothic-tinged sounds and ambient undercurrents, the persistent Rotting Christ would craft one of their most consistent and crushing career efforts. Mind you, this does not mean that they have abandoned ANY of such deviations, because Theogonia does it all, a microcosmos of their prior output delivered upon a new plateau of polished production that thankfully does not dissemble the pure power of the riffing here. You'll still hear the chanting, layered vocals and the tints of dark ambiance flushed beneath the hammering, metal matrix, but it seems this time the Greeks were after a level of heaviness they have rarely manifest.

For three tracks straight, Rotting Christ steamrolls its audience with slow, blasted surety, the measure and precise beats of Themis Tolis doing all they can to support the weighty textures above. Don't be thrown off by the funky, wah-wah ingredient of "The Sign of Prime Creation", because it is for the most part a stream of melodic black metal with the same, percussive pomp one might have heard even on their earlier 90s classics. "Nemecic" has a lot of darker, grooving chords churning about like well sculpted mud, but the ritual, whispered vocals of Sakis more than atone for its oozing visage. Once you arrive at "Enuma Elish", you get a power thrashing that evolves into some glorious, glinting melodic textures and escalating beats that bleed straight into the atmospheric, four-chord chorus.

But Theogonia becomes more interesting as you proceed, into the grooving variation of "Rege Diabolicus", ambient-gone-surging of "Helis Hyperion" or the grandiose finale "Threnody" and its tribal, percussive subtext, like a more modern take on the Triarchy of the Lost Lovers style. I wouldn't say there were more than a handful of individual riffs to die for here, so to that extent it doesn't match up with Genesis, Khronos, A Dead Poem or most of their better works, but the fact remains that the band keeps their composition kinetic, diverse and fascinating, with multiple layers at work in any given second, and much for the ear to consume. Tolis' vocals are strong and central to the lattice of intricate lead-spikes and lurching, jerking rhythm guitars, and it would be difficult to found an instance in its 43 minutes where the content truly sags below the level of consistent inspiration. That said, it does often come across like an amalgamation of their prior efforts, almost as if they grew wary of stepping forward, and so decided to stack the past 3 or 4 albums together like sheets of transparency paper and then flick on the overhead projector.