Medieval Demon - Necrotic Rituals from the Unholy Past (2010) 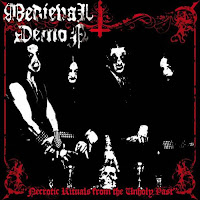 You might recall a little known gem from the formative years of Greek black metal called Demonolatria, a slab of cheesy but endearing, symphonic evil perfect for flitting about your personal, haunted castle and strapping victims to torture racks. Or you might actually be sane person, and not give a fuck. Well, 15 years after that unsung record, Medieval Demon and friends have seen fit to gather up a bunch of rare or unreleased material and release it upon the same public that ignored them in the first place. Don't ask me why they bothered, but if I can say something in their defense, this is a shit ton of material here, about 76 minutes of blathering obscurity, much of which has a more vicious appeal than their debut.

The compilation includes the band's 1994 demo, Night of the Infernal Lords, which is pretty hissy and primitive by todays standards, yet raging and filthy and sure to please those hunting the early Norwegian and Swedish demo recordings from their favorite heroes. There is also The Blood is the Life, the Only Path...to Immortality demo (1995) which consists of two pieces at a whopping 30 minutes. Better produced, with a lot of variation and comparable in style to the actual Demonolatria full-length, but not necessarily engaging or enchanting for the full run. The rest of the tracks seem to be taken from either the full-length itself, or a promo that was released that same year, and these represent the best produced of the bunch. Tracks like "Dark Widow", "Fields of Tears" and "Demonolatria" itself are a good fit for those seeking that mid 90s authenticity, with a lot of reverb on the vocals and solid songwriting.

Note that even the redundant tracks here are not as atmospheric or symphonically imbued as their full length counterparts, and the best place to start experiencing the Greeks would be on Demonolatria itself. To think, this band might have evolved into a contender for better known bands like Ancient, Cradle of Filth or Dimmu Borgir had they just pressed on. They certainly showed the competence and execution, even if they're derivative of those named acts. At any rate, there's not a whole lot of impetus to acquire Necrotic Rituals... unless you're either a friend of the band, a long time, wholly devoted fan who wants to throw these guys money, or just a damned completist. The two long songs are interesting to lose oneself in, but you're better off spending money elsewhere. I guess some of the members are still involved in a shop over in Greece, so who knows if they'll ever stoke those Stoker fires and reunite this lost project.