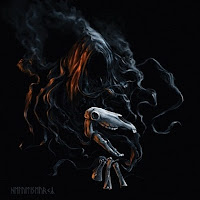 Perhaps the biggest weakness of Shamaatae's 7th full-length album under the Arckanum banner is that it stands in the shadow of a trio of superior works, one of which (ÞÞÞÞÞÞÞÞÞÞÞ) stands as one of the best Swedish black metal efforts I've heard in my life, not to mention one of the best genre offerings of the 21st century. Next to that, even last year's Sviga Læ was a disappointment, though a strong one with some residual brilliance from its predecessor. Helvítismyrkr is unquestionably a solid record in the same vein as the last batch, but it suffers from a few half-formed riffing sequences and a generally predictable air that lacks some of the driving intensity of his 2009 masterpiece, and ultimately winds up more on the level of a Kampen or Kostogher in total quality (neither of which are bad).

The production and richness of the guitars here is a direct remnant of the last two full-lengths, and the central feature in its broad swath of melodic, mythologically inspired lamentations. It's got a mildly more airy tone to it than ÞÞÞÞÞÞÞÞÞÞÞ, drawing a little on the debut Fran Marder in terms of aural aesthetics. Where the vocals felt forced, brutal, and hanging just below the storming guitars on the last two albums, here they seem to grant themselves more space, a dark bark over a desolate river course of simplistic Swedish riffs that sound like a black metal sibling to countrymen Amon Amarth. What Helvítismyrkr does not fall short on is its variation: from the gliding, plodding melodic heavy metal foundation of "In Svarta" to the rumbling black/thrash undercurrent of "Or Djupum" with its ample Motörhead bass and minimal, driving notation. "Prudgelmnis Hlaut" has a lot of pumping, romping chords in it, though the double bass rhythms feel pretty samey with the other half of the album ("Helvitt", "Nifldreki", etc.)

The problem is really just that most of the riffing sequences feel only partially formed. Take, for example, my favorite song on the album, "Svartr ok pursligr" which sounds as if it's opening guitars would have summoned up the perfect riff with just a dash more complexity. Transitions ebb and crash into one another here, whether dead stops or natural ligaments, but while the new guitars entering each composition always seem enticing at first, they seem to also peter out into predictable patterns that lack some of the subtlety of the prior records, or rather, their hypnotic, potent effect. The vocals, while fully grisly and Shamaatae, also seem a bit more repetitive and numbing on this album Sviga Læ or ÞÞÞÞÞÞÞÞÞÞÞ. Granted, as far as such primitive guitars rhythms go, the clarity and punch of the production goes a long way to dressing them up, but I came out of Helvítismyrkr feeling it was just more of the same, only less compelling.

It's still a solid way to kill 50 minutes, mind you, but I'd be lying if the thought wasn't nagging at the back of my mind that producing four full-lengths in as many years might be wearing the formula a bit thin. Visually, it's an appealing record with beautiful, mysterious cover art that maintains loyalty for the Arckanum image, but beneath its surface it lacks some of the black, formidable subtleties that defined all of Shamaatae's best works. It's more than tolerable, but seems to play it a fraction too safe at what might be the perfect time in Arckanum's legacy to deviate or experiment.