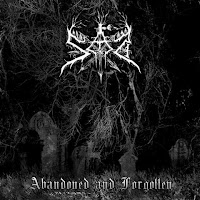 I think I can trace the rather lackluster showing of Sad's more recent output to one obvious culprit: burnout. Stylistic excess. When your primary songwriter is involved in half a dozen bands, many with the same general principles and style, something is going to suffer along the way, and the Greek band who released a good sophomore in 2007's A Curse in Disguise seems to have hit a roadblock with their two consecutive efforts. Abandoned and Forgotten is all too likely to be suffer the actions of its namesake, because it's really just more of the same as Enlightened by Darkness; the same material that not only this band has been creating for a few years, but many middle of the pack black metal artists slump about with. There's just no ambition here at all, no pushing of boundaries, no pushing of the self.

That would be fine if the riffs and songs were immaculate and memorable, but this is just not the case here. I'll grant that Abandoned and Forgotten is marginally superior to its predecessor. There's a nice, clean, even tone to the guitars that blends in accordingly with the vocals and drumming. I think this has the most 'airy' aesthetic of any Sad record, and that's not such a bad thing. They aren't excessively repetitive, and exchange dynamics so the listener isn't left in an incessant feedback loop of boredom. You've got the marching, mid gait of "Creatures Untold" or "The Black Parade" contrasting the brighter, melancholic flow of "Solitude" or "Fall from Grace". Nadir does a decent job coming off as a man in pain, and we all know Ungod is tight as fuck from the major amount of experience he's been racking up on numerous releases. Yet, there are just no surprises here, no riffs that come along and clutch the listener's spirit, casting it into the pit of ichor and negativity at the heart of black metal.

I admit, I was not expecting to ever hear a Radiohead cover done in this genre, but Sad have including a snarling rendition of "Street Spirit" (The Bends, 1995) complete with waves of tremolo riffing and bitter snarling that almost outshines the rest of the album in pain. I like that they've made it their own here, which is essentially what you want out of any cross-genre, contrasted cover song, but it's not necessarily interesting enough that I'd go out of my way to hear it. All told, this is a slightly more impressive experience than Enlightened by Darkness, and well beyond where they started with Total Nothingness, but there are no new tales to tell, no tricks and nothing out of the ordinary. I get the impression that Sad could write a half dozen albums a week of this caliber, but that doesn't mean it should happen, especially when you know they could do so much better.