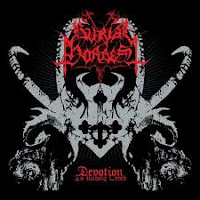 Devotion to Unholy Creed seems like a pretty well regarded album in general, and just about every I know who's heard it claims it to be one of the best traditional black metal works of the 21st century, with an unflinching old school attitude that pays tribute to the progenitors of the medium (Hellhammer, Darkthrone, Bathory, Mayhem, the list goes on). After being only mildly impressed with the Burial Hordes debut, and seeking something new and exciting from the Hellenic soils, I was expecting to have my ears bloodied and brains knocked out, yet I'm disappointed to say that it's honestly not that much better than War, Revenge & Total Annihilation. The production is quite incendiary, I'll grant it, and there are a few highly inspired moments of magnificence, but this is one of those albums where I actually found the creepy interludes and distractions to be more interesting than the music, which features a lot of the samey, familiar riffing we've heard through countless cycles already.

I do quite like the wheelbarrow guitar tone, mind you, and the variation that the Greeks exhibit from track to track, but once I dissect the riffs they all feel a bit warm, fuzzy and derivative, with very few standouts, like the eerie tranquility of the "Splendid Destruction" intro or the bristling, thick melodies in the depths of "Hellborn". With the exception of a few lengthier bits ("Stench of Immortal Doom" and "God's Cutthroat"), they keep most of the tracks on the shorter length, so there's not really any chance they'll wear out their welcome or incorporate spare, needless sequences to pad the length. Where Burial Hordes really excels is in how they've set up the progression of the album, and the horrifying ligaments between them, like the end of the title track: distorted swells of opera with sounds of freaky torment and crying; or the baleful howls that bridge "God's Cutthroat" and "Abysmal Goatfeast", rolling right into the blocky, mid-paced Hellhammer/Darkthrone riffs. A few more instances of this infernal atmosphere would not have hurt the album.

Otherwise, it's all pretty average fare, just on the plus side. I'm reminded of fellow Hellenic blackhearts Ravencult, whose Temples of Torment followed a similar approach: guitars out front where they belong, solid if ultimately unmemorable riffing structure, and a forceful atmosphere dealt largely through the burgeoning rhythms themselves. Burial Hordes use a grimier guitar tone, though, and the notation is not quite so sadistic and penetrating. At any rate, I can see the appeal to this sort of album, it certainly is a little bit more exciting and versatile than many other recordings in its niche, and I enjoyed it somewhat more than the debut, if not by a wide margin. It's successful as far as offering its influences an option to time travel into the present, but doesn't produce any songs I'm going to want to hear months or even weeks later.