Necromantia/Acherontas - ...For the Temple of the Serpent Skull EP (2008) 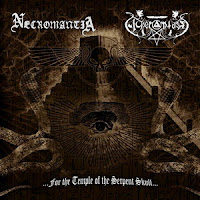 ...For the Temple of the Serpent Skull... is not only a substantial collection of quality Greek black metal, at least within the schematic of a split record, but also a gathering of the 'old and new' in this particular occultist niche of the genre. We've got both the (once) mighty veterans Necromantia offering two solid contributions, but also Acherontas (formerly known as Stutthof), who had released their decent debut Tat Tvam Asi (Universal Omniscience) the year prior; and I'll admit, that the pairing seems very natural. Even if Necromantia is the more unique of the pair, with their signature second distorted bass supplanting a guitar, most of the material found here is incredibly here is incredibly atmospheric, and for the most part...exclusive to this release.

We've already heard "People of the Sea" on the limited 7" of the same name (also through Dark Side Records), but as I mentioned in that review, this is the place to own it, since you're getting like 36 minutes of music total (about an album's worth, when you think about it). The other Necromantia track, "Magnum Arcanum", is 12 and a half minutes in length, a grand and diabolical movement which is more symphonic than anything else they'd done of late, basically hearkening back to the bewitching threads of evil that dominated Scarlet Evil Witching Black. The muddy bass tones run beneath the orchestral glaze like a river of the dead; the intermittent bridge sequence, which features harried, light tribal percussion beneath shining synthesizers and deep, clean ritual vocals, is also a delight, and though it does often feel as if it were rushed or shoved together at the last moment, it's 100% old school charm.

And yet, "Magnum Arcanum" is not the leviathan of this release. Acherontas' "The Order of the Silver Serpent" is almost 18 minutes in total, with three distinct movements. The first, "Invocation" incorporates creepy synthesizer tones, whispers and distant backing choirs as it slowly gathers steam into the raging Scandinavian black metal symphony that is "Sacrifice". I cannot promise that the riffing itself is all that different from the rather average fair the band were writing as Stutthof, but deeper in the belly of the epic, they increase speed to a truly punishing blast with some of the harshest vocals on the album, and the result is crushing enough to leave only a brimstone stain where your body was seated (or standing). Too much of this could kill a human being, so it's fortunate that the "Rising" outro sequence is performed with clean, ambient guitars that gently fade out into oblivion.

Neither of these extensive works is necessarily among its respective artists' finer repertoire, but pooled together, they promise an eerie marriage of black magic and mystery that might well thrill the black metal fan who goes out for existentialism and carnal spirituality. "The Order of the Silver Serpent" would later be released again on an Acherontas compilation, which might be easier to find, but Necromantia die-hards will want this just for "Magnum Arcanum", and to save themselves the trouble of the People of the Sea EP.