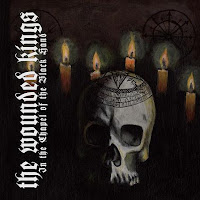 One of the most surprising and stunning albums of last year, The Shadow Over Atlantis was pretty much the pinnacle of drowning, crushing and uncomfortable doom metal I had experienced in the past few years, plunging the listener directly into the lightless, deep green depths of its titular myth. Expectations would naturally run high for its follow-up, but the band has gone and shocked us all once again with a new arrival in the vocal department, one Sharie Nyland, who joins the whorls of black psychedelia with a droning, beautiful presence redolent of a spectral lament over some long abandoned, mist shrouded refuge. I realize this seems a trend of late, what with bands like Blood Ceremony and Jex Thoth building reputations in the medium, but trust me when I say that Nyland is not simply distinct, but the perfect match to this mournful, longing music, so much so that I nearly blanked on the performances of Birch and Mills on the sophomore.

Otherwise, In the Chapel of the Black Hand starts with Black Sabbath and Pentagram as reference points, and grows ever darker across its four compositions, three of which are rather substantial at 10-14 minutes of content, or at least more so than anything off the last record. "The Cult of Souls" is a monster, its staggering grooves snakelike as they writhe off against the sparse, scintillating organs in the background, Nyland immediately staking out her territory as she carves her melodic contrast against the weight of the guitar. Climactic and frankly a perfect opening ritual to this effort, it's 14 minutes of just about the best you were hoping for, even if the aesthetics do abandon the sinking sensations of The Shadow of Atlantis in lieu of a Dionysian ritual. I was marginally less impressed with the next piece, "Gates of Oblivion", at least for the first two minutes until that baleful, oppressive riff develops around 2:15, at which point it makes everything My Dying Bride ever wrote seem like a trifle by comparison (though the influence is indisputable). Rarely have I heard a band groove so slowly and scarily without crossing the veil into the realm of pure funeral doom, but The Wounded Kings qualify on both sides of the margin.

After this comes the shortest piece on the album, the 4 minute instrumental "Return of the Sorcerer" over which a burning, bluesy lead murders the listener another intense, grooving edifice of utter despair (the wah wah gives off a mild Alice in Chains vibe); and lastly, the title track arrives, perhaps the most focused of the major tracks at just over 10 minutes, with a lot more accent on the guitars, and further, minimal leads that sail over the twisted, crushing course. Once this track hits about 8 minutes, it becomes insanely atmospheric, with a backing choir that hangs beneath Nyland's transformation into a human organ, or a banshee shifted down several registers, just as deadly without the shrieking. Anyway, overall this one isn't quite so gripping as "The Cult of Souls", the real highlight of the album, but it's nonetheless consistent, appalling and immersive in equal measures.

The many compliments aside, In the Chapel of the Black Hand is not quite an equal to its precursor in terms of ability to fully absorb the listener. Upon a completion of The Shadow of Atlantis, I had to open my window to even see if the sun were still present, it was so amazingly atmospheric and frighteningly heavy. With this album, I feel like clouds, perhaps a bit of rain, maybe a lightning bolt superimposed over some distant graveyard scene, but I still felt like my corpus and soul were still attached to one another. Stylistically it is no huge departure, of course, but the shift in vocal strategies could damn well trick the uninformed into thinking this was a different act entirely. But in the end it makes no difference, because for such a massive, tangible alteration, they've succeeded with aplomb. I found Sharie Nyland more spooky and impressive than any of her contemporaries. She might not have an amazing range, but there's a phantasmal and silky depth to her intonation that feels like sanity slowly slipping away, and what better a figurehead for this galleon of ghoulish miasma.