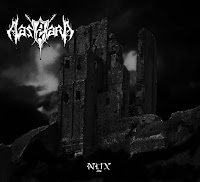 Somewhat comparable to Grab's debut album Plague... from the same year, Aasgard strives to grasp the second wave black metal medium by its scrotum and breathe sickness once again into its stagnant, decaying testes. However, this duo goes about it with a more organic feel to their writing, anchored by solid and meandering melodies and pummeling drum beats which almost sound like they are in a separate dimension to the distorted fabric of the guitars and the salacious, rasping drawl of the vocalist. They incorporate some degree of variation into their tempos and tones, and I can say that few of the five songs here sound exactly the same, but a lot of the blast sequences do become monotonous in time.

I'll point out that four of the tracks feel flush from the same recording sessions, but the bonus "Battle Within" is actually culled from the previous year's demo Behold. This tune has a more understated, acidic primacy to it, truly grisly and raw and not so much comparable to the rest. I rather prefer the lucid crawl of "Splendour of the Barbaric Winter" as it accelerates into fevered warfare, or "As I Walk the Steps of Death" for the fuzzed out bass that slices through the stream of coagulated blood that is the guitar line. I also enjoy how they bounce the rhythm guitars off to one barely audible side of the mix, while the melody cuts straight down the middle. It gives the feel of some churning, grimy cemetery mud. Alas, there are points in "Obliterated from All Passions, Standing Above Myself, Near Myself" and elsewhere when the drums seem to almost fall off the rhythm-rails, and ultimately there are no individual guitar lines that truly stand to attention.

Nyx is another of a thousand or so European black metal recordings which I can deem no more than just 'okay'. They've got a good grasp of their genre, they know how to implement dirty sounds over rugged, lo-fi production and they can, in general play their instruments. The lyrics aren't half-bad and the atmosphere of requisite oppression is evident. They certainly follow in the mold of records like Transilvanian Hunger, Nattens Madrigal and Burzum, but they never quite step outside that box of derivation, nor do they match or surpass any of the hundreds of records that have successfully shaped this style. But this isn't a bad start.