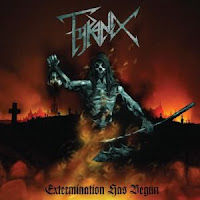 Female front-persons have always had their place in the realms of speed and thrash metal, though success stories have been very few and far between, and even those that have functioned flawlessly have often had to seek succor from underground only appreciation (Dawn Crosby, Nicole Lee, Anne Boleyn to name a few 80s goddesses of the form). Well, fairly early in their demo cycle, Linnea Landstedt of the Swedish drag-racers Tyranex decided to take the helm, and what a decision that was. Extermination Has Begun is like listening to the outright blitz of late 80s Tankard with a harpy at the fore. She's got both an acidic lower range and wild, uncouth highs that fly over the hyper-riffing like ballistics, creating a contrast akin to a 'finer sex' alternative to Rage's Peavey Wagner during his 80s prime. Or how about: Sabina Classen + Schmier? Yes, I went there. Yes, that is what THIS IS.

Now, I won't promise that these guys are writing the most top-notch riffs imaginable, but it's clear that they've put some work in on their German classics, and the result is nothing less than a spiked fist fucking good time. The Morning After on estrogen injections? I'll buy that for a Euro, or twenty. Tyranex literally explode with energy, as evidenced on scorchers like "As the Cross Crumbles" or "The Curse", but that doesn't mean that they're dynamically unawares, because they'll often perform slower bridges alongside the leads, or mid-paced wailing thrash beasts like "Awakening the Dead" and "None So Cruel" which focus on simpler, lower end riffing and more drawn out verse vocals that show an even more grisly character. Riffing structures are redolent of everything from Destruction, to the aforementioned Tankard, Holy Moses, and even a spike or two of early Megadeth and Metallica. Pretty much the perfect union of ancient speed and thrash, and one that is worth experienced time and time again.

Granted, if you're not acclimated or interested in the frivolous and psychotic, accented vocals that were dominant in the Teutonic thrash market of the 80s (or elsewhere in Europe), Linnea might be a hard sell. She's not afraid to flex her eccentricities, even if a note here or there seems to scale out of key. But on sheer charisma alone, she's solid gold, and I wish more retro thrash bands would take such a chance. Not so say that she's solely responsible for the album's ripping qualities, because the guitars, bass and drums are also spring-loaded with love and velocity for the form. The production feels straight out of the decade it emulates (only louder). And the lyrics thankfully avoid all the beer metal excess that Tankard already perfected and many other bands fail to effectively adopt without looking like bandwagon teens. Extermination Has Begun is hardly original, but it's blinding speed and vicious underpinning rank it alongside War of the Voivodes (from Spain's band Körgull the Exterminator) as top-shelf female fronted fanaticism for the Golden Age of extremity. So throw those Nightwish and Epica records away and learn how it is fucking DONE, people.