Diabolical Principles - Beyond the Horizon (2009) 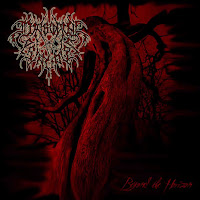 2009 marked a year in which several obscure fixtures of the Hellenic underground would 'officially' launch their other projects upon indie labels. That's not to say that these were all new bands, for example this Diabolical Principles project was around before the turn of the 21st century, but until about this time they were nothing more than a few demos and footnotes. Fascinatingly, I actually find that several of these acts are superior to those that spawned them, which holds true for this band, involving members of Mortuus Caelum, Burial Hordes, Unholy Ritual, Obsecration and a long list of Greek extreme metal acts. Beyond the Horizon might take some getting used to, due to the fact that it's production feels a little too skewed towards the symphonic keyboards, but I actually found its blend of atmospherics and primal, black substrate much to my liking.

This isn't the sort of 'symphonic' black metal that comprises intricate swells of strings and horns, more of a dull and numbing, cold and blatant use of minimalistic keyboard lines that are rather loud against the rambling rasp and streaming tremolo melodies of front man Gareth. I also can't consider it highly unique, as there's a pretty stock Scandinavian subtext to how the guitars and synth lines are composed. But as far as transporting me to a shadowed night-realm of grandeur, Beyond the Horizon does the trick ably, through both its frenzied, forward compositions like "Might Though is Sadness" and "The Legions Revival (The 3rd Era)" and the slower, surefooted majesty of "Journey Into Infinity" or "Darkness". There are a few sequences throughout the album in which the band becomes more complex in orchestration, using light, synthesized strings, as in the intro "Passage to a New Dimension" which is very well developed, or deep in the depths of "Might Though is Sadness", but in general it's the crude guitar tone and narrow palette of pads that give this its charm.

Unfortunately, an album like this one so often seems to slip straight past the audience that would appreciate it. With such an enormous wealth of symphonic European black metal out there, it is difficult for Beyond the Horizon to stake its own ground. The production here does not rival the big league chew of Dimmu Borgir and Emperor, and there are no flashes of indulgent excess or showing off to be had. This is not a 'freakout' album by any means, it simply ebbs along and assimilates the listener into its withered limbs. Many would undoubtedly be turned away by the perceived imbalance of keys to guitars, but I take exception here due to the soothing and eerie majesty and malevolence the technique creates. There are few outstanding guitar riffs on the album, nor are the vocals exceptional, but all told it's a nice twist on the mid-90s Scandinavian black metal aesthetic that bands like Ancient and Emperor hurled into the stratosphere.