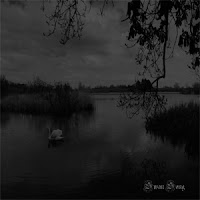 Any year your band/project is releasing multiple full-length albums stands a huge chance of one or more suffering from mediocrity, and while Lykauge's Under the Veil of Depression was a solid start in a more depressive, Hellenic aesthetic of the genre, it's near neighbor Swan Song suffers a bit of bloat and repetition and the automatic inconsistency of containing some earlier, demo material. That's not to say there is nothing of worth to be found among this 75 minute monstrosity, because there are at least a few songs here which are admittedly fucking great, but honestly: enough fat could have been trimmed from this record to be melted down into lamp oil and soap for a century of usefulness.

The intro, "Gate for a New Dimension" is primal, tribal and ambient as you hear the whir of night creatures and crashing undercurrent of percussion, but then it immediately screams into a jumbled, dissonant blast metal song which has nothing more to say for itself than layered, tight aggression. "Pointless Optimism" is even more deceptively chaotic, though the irony of the title is not lost on me, and then "Doomsday (Twilight of the Gods)" is, you guessed it, another blaster. All this would be fine if the tremolo riffing was actually memorable, but it's banal at best. Almost to prove this point, the album picks up marginally in quality as soon as he breaks into a more steadied, mid pace track in "Ready to Leave This Place", but even that explodes into worthless blasting at its median. A few songs have promising guitar lines, like the climbing melody of "Rising Through the Fire" or the streaming melancholy of "The Rebirth of Chaos", but the majority, like "12/13/14" are dull as a stump.

So where are those 'great' tunes I mentioned earlier? Not a part of the core album, but wedged into the end, part of some other session. "Enslave" and "Abysmal Authority" are both dynamic, evil hybrids of the black and death genres with vicious, layered vocals and a cleaner, more focused energy. I can't say they're necessarily the most amazing or original, but they clobber everything that leads up to them. Perhaps this because about 50% of the core album is drawn from prior split recordings, but these two are fucking intense, with hyper blast batteries and an ornate, evil certainty. Ultimately, Under the Veil of Depression is a better, more consistent place to start your Lykauges exposure, but I wouldn't mind hearing a continuation of this brutal intensity hidden in the aft of Swan Song (which I'm assuming is not actually a final album?)