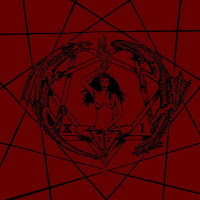 It's presentation might leave something to be desired, and the actual variety of the material might not always be pristine, but Serpent Noir's Sanguis XI EP presents a rather fascinating approach to the first wave of black metal. Their prime motivator is obviously the Swiss legends Hellhammer (or Celtic Frost), but they dowse the simple, thick and grimy barrage of mid-paced chords with a lot of atmosphere throughout, while keeping the songs tight and short and never really wearing out their welcome. In addition, the vocalist has this dour, gravelly black bark which fits extremely well over the guitar tone, and he becomes quite manic and passionate through the three and a half tracks upon which the brute lyrics are used.

I guess I shouldn't be all that surprised, seeing that the front man here is Kostas of the great Greek death metal band Embrace of Thorns. He holds a similar resonance to that found on those albums, just a little more varied and painful. The other veteran here is Michayah, a drummer that has played in a number of Swedsih bands (Ofermod possibly the most known). They've really set up the recording well, with a freakish, ominous dark ambient intro in which deep synths measure off against other random noises. Then it's straight through a trio of muddy, grooving old school black metal pieces in "Midnight Consciousness", "Sorath Invocation" and "The Disputes", the second of which has a lot more reverb on the vocals for an unnerving effect. You'll hear a couple clean, deeper vox also in "Midnight Consciousness" which also work despite their painful brevity. Later on the EP there is admittedly more variety, with the two part "Rituals Draconis" that opens with chanting, percussion and ambiance and ends with surges of clean guitars; while the finale, "The Eleventh Blood", opens up with a faster paced black metal segment (the worst thing here) and then closes with more brooding ambiance.

Ultimately, there's a lot of balance here, and as far as ritual black metal goes, this is one of the brighter new bands I've heard in the Hellenic scene. We'll have to wait and see what develops next, perhaps a full-length with some more varied grooves than the bulk of this, but I'd say they are off to quite a solid start.