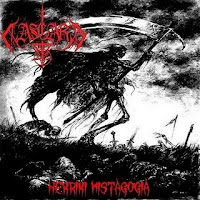 When Aasgard's latest effort opened with an ambient piece set to a sample from Zach Snyder's 300 film, I admit to being surprised, but thankfully the Greeks jerked me straight back out of this reception and into the primal, tumultuous decay of their black metal material. Still, there is something subdued about Nekriki Mistogogia, as they seem to have cut down on the blatant belligerence and gone for an aesthetic of raw, distant glory. The guitars here are more tightly composed than those of Ravens Hymns Foreshadows the End. the year prior, the vocals more level and the drumming fairly concrete, but the patterns of notation seem more wrought of sadness than spite, at least on about half the tracks.

"Call to War" is the aforementioned intro, and then the band rips into "The Beginning of the Fall" which is grimy but steady black metal propulsion with its roots in the same well as their previous material, only with a more clapping, ringing undercurrent of percussion. "The Search for a Glorious Death" is perhaps the most melodic of the metal tracks, with a lot of thundering double bass and longing, wall of sound chords drifting against the backdrop. The title track is where it becomes more ponderous and solemn, though the style is not a deviation from the previous cuts, and "The Day Who the Gods Will Marching Again to Earth" is mostly more of the same, though there's still that air of determination and seriousness that one didn't really get from the last album, and a good, booming bridge march riff. Closing the release is "Nekropobi", a clean but blaring guitar piece with ambient samples of crows, rain, storm, and so forth.

Some of the small handful of fans familiar with the band might be taken aback by this more focused, less vicious material, but it's still quite heavy in the end, and it's not as if they have jumped ship for high quality production. Nekriki Mistagogia simply seems more aired out and thoughtful than the violent misanthropy of its predecessor, and that's not a bad thing unless you were expecting more of the Greeks' Beherit, Archgoat and VON-styled filth. Anyway, the same criticism applies to this material as their prior output: I just don't find the guitars that bewitching, and everything feels samey to a large population of other underground acts playing in that primitive, necrotic and 'grim' fashion. I don't mind the oft jumbled tones or the clamor of the drums crashing beneath the gnarled vocals, but there's little notation that stands out. Okay if you want a thundering, black metal backdrop, but not exceptional by any means.