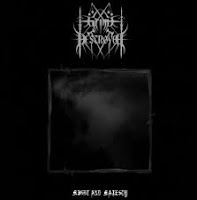 About as obscure as these things go, Grim Destroyer is a solo vehicle for the black-hearted Chaosforos, who performs guitars and vocals for fellow Hellenic project Riddle of Meander. The style being played is not a hell of a lot different than their debut album End of All Life and Creation: raw and punishing black metal in the North European tradition of Mayhem, Marduk, Burzum, Darkthrone, Immortal and so forth. I had not heard this record prior to my decision to embark on this Greek black metal study, so by the title and band name alone I was expecting something frankly powerful and hilarious, but that's not exactly the case. Might and Majesty is not the most banal and forgettable album I've heard from its scene, but it suffers a little from the general familiarity of the guitar patterns and lack of transitional variation and menacing undercurrent.

I do find Chaosforos' vocals appropriately hellish, here. There is no question that it feels like a man whose organs are being removed with surgical tools, or a werewolf on the scent of its prey. I also like that he uses a bit of deeper, clean tone (in "Thou Art Hecate", for example) as a counter point to the systematic rasping. I also dig the guitar tone, which is fuzzy and thin in the vein of Ulver's Nattens Madrigal or early Burzum, only not as noisy as the former. The bass is also a delight, tracing along beneath the guitars like a bumblebee following a paper airplane in flight. the drums are standard but effective, alternations of steady mechanical blasting and rolling double bass that queue up to the mid-paced or slower sequences. The real issues is just that, when you hear one Grim Destroyer song, you feel like you've heard them all. There's not a hell of lot of variety in the black riffing, and even where he hurls something out of left field (like the brief acoustics in the title track), it's just not that catchy.

It's sad that the most involving and engrossing piece on the album is the finale, an 8 minute minimalistic ambient track without much variation in itself. There were hints of this in the intro to "Nostalgia for the Dead", the most keyboard heavy black track on the album, but it's over 9 minutes long and quickly runs out of steam. At any rate, Might and Majesty is just not good enough to leave an impact crater in its wake. For those who are seeking out only the familiar and predictable sort of 'true' black metal that venerates their heroes, one can do a lot worse than Grim Destroyer, and it's passable background listening if you seek something effectively newsprint-toned in its aural palette, but not likely to be important in the long run.