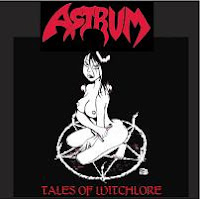 I'll give Kentucky's Astrum some credit. They are one damned straightforward band, seeking little more than to punk up the formula of grisly proto-black metal pioneered by Tom G. Warrior and Hellhammer back in the early 80s. Simple, almost sludgy guitar tones propel the leaden rock beats while Timpaler von Mulciber's constipated bark draws a clear comparison to that Swiss icon. To that extent, Tales of Witchlore succeeds more than its predecessor Apocalyptic Dawn, an album of good intentions that was somewhat crippled by an occasionally messy vocal meter and crude instrumentation. It might not feel 'leaps and bounds' beyond in terms of songwriting quality, but it definitely cracks a few more poseur skulls.

It's the antithesis of complexity, for example, but you can easily circle pit the shit out of a track like "Triumph of the Black" or "Devil Worshipping Bitch", because there is something so lewd, honest and menacing about the guitar tone. I was having flashbacks to Sheer Terror here, a surge of filthy hardcore charisma, even if Astrum don't write riffs that are quite so catchy. Of course, there are some pure punk/hardcore riffs present, like the chorus bits in "Blood and Sand" or just about all of the calamitous, crashing "Master of Rock", but the oozing, bruising and fairly loud guitars render them no less of a threat. Timpaler's vocals might not always have the most effective of syllabic patterns, but they definitely seem tighter here than on the last album, so that is also a definite plus, and I liked how he threw the reverb over the chorus to "Devil Worshipping Bitch" (though the volume was mildly overbearing). Also, even though it's twice as long and much more of a direct Hellhammer style than the others, the closer "Gray" had some promise to it, some crushing rhythms which felt like a punch straight to the colon.

I think the one lingering issue of importance that I took away from Tales of Witchlore is that the straightforwardness I mentioned earlier often works to the songs' detriment. Usually the tactic here is to fill a 2-3 minute track without a simple riff or two, maybe a bridge with a solo, and call it quits. This isn't itself an awful technique, but with such simple notation, a few alternations, twists and turns in the tracks wouldn't help. A fraction of added depth to each would have gone a long way towards making each of the pieces more sinister, dynamic and effective. I realize that one doesn't approach a band like Astrum for a highbrow experience, more to kick the mud off the old combat boots; but there is a bit of space here where the repetitive (often similarly structured) verse riffs might have been better molded with a few subtleties.

Otherwise, the gripes are few. At first I found the cover a little cheesy, but hey...an illustration of a cute, naked witch sitting in a pentagram? I'm a hetero living in Salem, Massachusetts, so who am I to complain about that? The lyrics aren't bad at all if you're into the old Venom, Bathory and Hellhammer stuff; some are even funny ("Devil Worshipping Bitch"), and there are a few thinly veiled tributes in "Spectrum of Death" to Celtic Frost which I found amusing, but mostly they continue along the paths of the occult and impending nuclear Armageddon that were prevalent on the debut. Astrum might also seem not so unique, as there a number of other bands who pursue the same, simple strengths of their shared inspiration, but a lot are European, so it's fairly badass to have one here in the South. Perhaps I might not have the most glowing opinion of Tales of Witchlore, but all told, this IS a step forward for the band, and really, they're only a few strides from developing into something pretty damn fun. It might not be the perfect soundtrack to some necromantic rite, but hell if I couldn't listen to this while kicking some Avenged Sevenfold fanboi in the face.