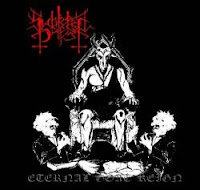 Being about the 16 billionth band to come along and populate their lyrics and song titles with images of nuns, whores, goats and inverted pentagrams, I readily admit that I went into Eternal Goat Reign with zero expectations other than hearing ANOTHER knockoff of the 1st wave black metal forefathers Venom, Bathory and so forth. It was a somewhat accurate assumption, because the Greeks certainly sound a lot like Quorthon's first three black/thrash outings with a healthy portion of Slayer styled riffing straight from the hub of the 80s. That said, though, Slaughtered Priest flavor the style with a lot of punkish fervor that feels like a less hyperactive alternative to Impaled Nazarene, and the croaking black vocals and thicker, more contemporary guitar tone definitely earn them a few points.

The album opens with a 93 second intro called "Bestial Nun Sluts", with smutty samples of the expected goat-fucking merged into a somber, backing synthesizer atmosphere with plenty of pornographic pleasure and pain. If this was supposed to sound seductive or perverse, I'm afraid it failed, since the goats sound too mechanical and methodic, as do many of the female voices, and by the time the fucking chainsaw arrives, you are simply not going to take anything seriously for the rest of the album. It was cool when Razor did it, folks, but it's grown a little tired. Fortunate then that once Slaughtered Priest starts rocking, they at least come off like a good time with the snaking, evil Slayer-ific guitars in the title track. There are a handful of other fun bits like "Antihumanity" and "Goat Hammer" which offer a balance of growls, ridiculous rasps and tight if familiar patterns of straight power chords, but the riffs themselves are about 50% on fire, and then 50% derivative to the bone.

Of course, because sodomized Sisters, bleating goats and chainsaw butchery are not comical enough to end this little chapter of obscurity, they close out Eternal Goat Reign with another synthesizer/sample coupling, this time of a baby (presumably the 'Little Jesus' in the "Infernal Tears of Little Jesus") whining along to more bleating goats, then a scream, then a crash...and darkness. Ultimately, Slaughtered Priest are pretty harmless, unless you happen to belong to the Clergy, and might succumb to the intended shock value. Their speedier, sinister licks are far more entertaining than the more generic punk/black rhythms, but the vocals and lyrics are at least minimally amusing, even if they're not really played for laughs. At best this is like a brash younger brother for Aura Noir. The thing is, well...it's just been done before, and too many times, and Eternal Goat Reign just doesn't have the riff-set or some other edge to cut loose from the flock.