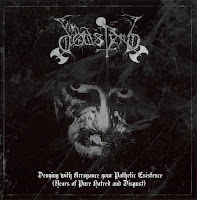 Don't be misled to think that the title of this 2004 demo re-issue is some sort of thinly veiled self-reference towards the music, because there is nothing quite 'pathetic' about the material here, which I find at least to be superior to Dodsferd's 2006 debut Desecrating the Spirit of Life, even if it's not exactly a revolution. This is the entire, limited run s/t Dodsferd demo with a pair of bonus lives. Basically these songs have a punkish/black aesthetic to them with simple, effective riffing and in general do not tend to drone on endlessly, with the one exception of "Pale Forests Sing for the Dead", which could have used a few moments of editing as it doesn't fully support it's nearly nine minute stretch of existence.

The intro and outro pieces are quite cool, the former ("Dead Amongst Me") featuring some lightly plucked guitars, a brooding swell of ominous synthesizer and a Night of the Living Dead sample; the latter also has a horror subtext with sounds of pain and torture. Of the three metal cuts featured on the demo, I actually enjoyed the namesake "Dodsferd" the most, about 3 and a half minutes of straight black punk riffing with a strong if minimal structure and howling rasped vocals in the vein of Burzum. "Pure Hatred" has a faster, streamed opening sequence which slows to a bleeding crawl while the chords continue to surge, but it does grow a bit tired. Not as exhausting as the aforementioned "Pale Forests Sing for the Dead", which features some solemn and memorable riffing that repeats itself into inevitable monotony. A condensed, 4-5 minute alternate take of the track would have been preferable, and by comparison, the other demo tracks seem all too exciting.

Lastly, there are two live cuts from one of the earlier Dodsferd performances. One of these: "Forever Cursed", had appeared on both the Kruzifixxion of Human Disgust demo (2003) and debut album in its studio incarnation, and while I don't care for the song, it's got an appreciable cold and vicious sound here with the vocals screeching and squelching in menacing fashion. The other inclusion is Burzum's "War", which makes a lot of sense, being that Varg is clearly one of the biggest influences on this Greek act. Again, the vocals are vile and cutting, the guitars sound half-decent, and the drums tinny and clamorous, but I've heard a lot worse. Ultimately, this is not a bad little re-issue, and should especially appeal to fans of the albums Fucking Your Creation and Cursing Your Will to Live, but the music isn't really all that special.