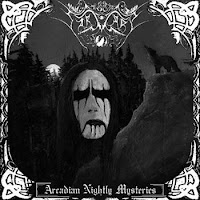 Sarvari is yet another in the countless cycle of worship bands who emerge from out of nowhere in some exotic land to honor their forebears with the coldest and most despondent trad black metal they can possibly muster. That being said, they also do this fairly well. Very clearly, what the band creates here on their sole (to date) full-length is a cross between Darkthrone's Transilvanian Hunger and the first four Burzum records, with a tinge of Bathory in some of the actual riffing, but regardless of the obvious derivative nature of its manifestation, Arcadian Nightly Mysteries is at least an album that the avid listener of the medium can get lost in. Again, this is a Greek band which doesn't sound remotely 'Greek', but a solid entry into a far overpopulated field nonetheless.

The guitars and vocals took center stage for me, as I enjoyed the rime-encrusted and fuzzy tone of the latter and the variation often used in the latter. Harsh barks and Varg-like screams are often chased with cleaner, depressive vocals for an effect that feels like a schizo from some backwoods, obscure asylum having escaped out into the winter air, lost out in the wilderness while the wolves are fresh on his/her heels. The drums crash and clip along as a steady canter, with a natural and rural feel to them as if they were recorded in a barn, but it's the streaming and reverb heavy, in your face yet strangely distant guitar that keeps the ear affixed through icy brawlers like "In the Deeply of Darkness" and "Walk to the Path of the Misanthropy". The band also do well in the field of slower, atmospheric material, like "Deep Inside My Tears" which reeked of Norse heroes Forgotten Woods (late 90s era), or shifting between the poles of sparse, ringing guitar ambiance ("To Burst Into Tears") and blasted fervor ("River of Death").

In the end, there's enough suffering here to go around. Just don't be expecting anything novel or even the faintest bit 'colorful', and you'll find that the album is well enough written to sate the fans of much of what I've listed above. Good listening for any night you can see your own breath in the air, or you're able to seek solitude away from the warm bodies of your fellow man. I'm not sure if the band plans on recording a foll0w-up to this, as it's been a few years now with no signs of life, but one might also check out another Hellenic band, Cry of Silence, which Granath also participates in. The styles are definitely comparable, though I'm admittedly more fond of the music written for Sarvari than on Walking Through the Eternal Tragedy.