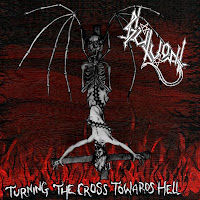 Though its production values will unquestionably prove irritating enough to turn off the audiophiles among us, there are absolutely two things that Seattle's Slutvomit does correctly. The first is the very banner it stands beneath. I mean, Slutvomit? That's got to be the best band conjunction-name I've seen in ages. The other is the sheer assemblage of despotic, old school traditions that have gone into their writing process. Because, you see, Slutvomit is honestly quite kick ass at composing riffs that stand at a crossroads between the stark, Satanic black, thrash and death metal of the late 80s and early 90s, and they manage this without entirely ripping off any one particular forebear, but still paying tribute to them all...

I'd like Turning the Cross Towards Hell to a noisier mix of Aura Noir, Bewitched (Sweden), Nunslaughter and old Bathory, but with slightly more splattered vocal stylings reminiscent of their local Seattle heroes The Accüsed. Think if Blaine 'Fart' Cook had fronted The Return or Deep Tracts of Hell, and you will not be far from the mark. Mighty praise, I realize, and yet this perverse trio actually possesses the chops to back the comparisons. "Servants of Hell" is a sharp and sadistic surge of vile speed/black metal licks, while "Harbringer of Doom" lives up to its name by presenting some slower, old school atmosphere through a resonant doom metal melody before it accelerates into a grimy, carnal black mess. Both songs have appreciable riffing, and the distorted vocals adequately disgusting enough to feel that you've just witnessed some impure rite and need to cleanse yourself immediately with the strongest alcohol available.

So where does it err? The production is intensely blocky and inconsistent, in particular in that the drums seem to be overpowered by the guitars and vocals. I realize it's actually a cool thing in some circles to develop as noisy and agonizing a throughput as possible, but I feel Slutvomit has the writing ability to clean it up a notch, let that hammering percussion bridge its way to the venomous axe-work. An an EP, it's admittedly short, just two tracks on a limited press 7". But then, that's not much of a complaint, as the format is all the rage among collectors and show attendees who want something unique to flaunt in auctions some years later. I do know this: I want a lot more Slutvomit. Turning the Cross Towards Hell might not be the most novel or entertaining record of its type, but if they can adjust those knobs every so slightly to the level of, say, Aura Noir's output, clean but mean, then a full-length should kick all manner of earthly and God-fearing ass.