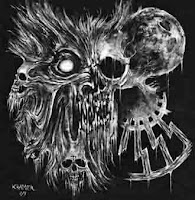 Ravenbanner is yet another unsung Greek black metal project to involve the talented Athalwolf (Wolfnacht, Zofos) and a pair of fellow musicians on the Nationalist scene, Jarl von Hagall of Der Stürmer and Saturno of Alastor. The three have combined forces to create some of the most ghastly and unapologetic 'white power black metal' on the planet, but unfortunately that's about all the good I can say for this record, since it seems sloppy and disheveled enough to ignore in the wake of far superior, structured recordings of the same genre and principle. The problem is that, aside from the raw punch of the guitars and the dread rasp of the vocalist, and an ounce or so of unintentional humor, there is just nothing here going on which warrants merit...it seems now that we're releasing just about anything with corpse paint and creepy cover art upon it, when once these were just icing on a frigid burst of evil.

...And Ravens Sing Our Glorious Past is such a mess that they don't seem to have really even tuned the guitars, just churned out some derivative note patterns with a tone redolent of Norse forefathers Burzum and Darkthone, added some tacky lyrics about Aryan blood and steel and werewolves and ravens and so forth, and provided a few fuzzy demo bonus tracks which are even more unkempt than the core of the album (though I liked the cheesy, tinkling keyboards in "Wolf in Dungeon Chapter"). Christian killing is of course optional ("Our Swords Cut Deep in Christian Flesh") as the band barrels along without creating even a single memorable riff...I don't even think they used a bass guitar here, and while that's not a 100% cause for condemning an album, it would have gone a long way to providing at least SOME foundation to the vapid, boring noise riffs that are coming out of these guitars. Outside of the laughable lyrics to the aforementioned "White Power Black Metal", and the primordial grunge of the demos, there's just nothing here to stand behind.

It's a shame, because all of the members have done better in the past with their other bands, and a union like this might have focused more on the individual strengths of the roster rather than just phoning in something like this. I recognize that there are instruments being performed here (the drummer ain't so bad), but it sounds as if they were written sporadically and drunken, as if there were no thought placed in their architecture or direction. Frankly, ...and Ravens Sing Our Glorious Past might be the worst Greek black metal album I've even heard, making even the less inspiring efforts of Wolfnacht seem godly by comparison. I get that there's this whole 'let's create bedlam on Earth' thing going on in underground extremity, but seriously, graft a spine on there and kill us with some tunes. Just like all your inspirations once did.