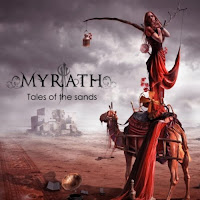 It's not often that I get to hear a lot of knockout progressive metal within such a quick succession, so the close of 3rd quarter 2011 is frankly spoiling the piss out of me: first with a formidable effort from Anubis Gate, second with the Arch/Matheos collaboration and now with a new full-length from everyone's inevitable, exotic heroes Myrath of Tunisia. This new release, Tales of the Sands is not so much a step forward from last year's Desert Call as that was from their 2007 debut Hope, but it's an ample successor with just as much practiced variation, seasoned compositional exposition and arching vocal prowess. Well integrated orchestration and omnipresent local percussion really give you a sense for who these guys ARE, and where they COME FROM, and just how many suburban Dream Theater doppelgangers could you say the same for?

Essentially a more attractive and memorable evolution of the schema set forth by New Jersey's Symphony X, there's not really a track that passes here where I don't feel immersed in some North African sojourn into the deceptively barren landscape. Multi-lingual lyrics, lots of ethnic vocal patterns and drums, and synthesizers that tempt and taunt at the listener like a mirage, Tales of the Sands could simply not have been more aptly titled. But no matter how far or how worldly Myrath might seem at times, they never distance themselves too far from their metallic core, whether that be the thick power metal subtext played out against the harmonies in "Braving the Seas" or the Dream Theater-like grooves strutting through the title track. Even the rabid raver electro bits that inaugurate "Requiem for a Goodbye" pay off due to the drums and almost immediate launch into a desert metal melody; and through "Wide Shut" and "Beyond the Stars" they hammer away pretty hard for this genre, weaving the aggression straight into Zaher Zorgatti's delicate thunder like fine linen.

What's even better, there is not a single damned ballad to be found on this album. No taking the easy way out, no compromise for the ladies. Tales of the Sands is a consistent environment, perhaps even more than its predecessor, though the band might no longer have the ability to surprise the listener (since Desert Call was so damned good). The professional mix here and the talent of each instrumentalist should easily place Myrath upon the radars of the progressive minded who fancy their fare clean and proficient. They don't exactly break the mold of their parent niche, but twist it into something localized and immediate, memorable and reliable that begs for repeat listens. I won't say that it hits the same high bar as its predecessor, and there aren't as many moments of sheer, passionate explosion as I experienced there, but Tales of the Sands proves that these upstarts are no fluke, but a formidable hymn of hope and reawakening in an all too stagnant international scene of lackluster DT & Fates Warning clones.