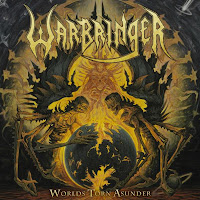 California's Warbringer are another of the undisputed forerunners of the present thrash metal retrospective, riding its wave to greater success than many of their peers. Like Evile from across the pond, they've worked pretty damn hard in touring and promoting themselves, achieved a good level of visibility through Century Media records, and in truth they perform competent throwback to the Bay Area aesthetics of bands like Exodus, Slayer and Vio-Lence. I can't say that I've enjoyed either of their priors (War Without End or Waking Into Nightmares), but they don't fuck off, they're not flamboyantly 'retro', and if that late 80s cluster of acts had been presented with modern gear and production values, you can be sure as shit it would sound like this.

That said, Worlds Torn Asunder seems a step forward as far as memorable writing. The leads here are brilliant and entertaining, hands down my favorite individual element of the album. They not only flex the guitarists' muscles, but they actually serve to tighten and element the thrashing momentum about them. "Shattered Like Glass" is one of the better examples of this transcendent excitement, but "Future Ages Gone" (with its Skolnik-inspired licks), "Enemies of the State" and "Savagery" are all penetrating. I've also got no qualms with John Kevill's vocal delivery, a weighted and bitter rasp which is clearly trying to reflect the Baloff/Souza school without blatantly robbing its cradle of creativity. The rhythm section is tight, and they offer a good variety of tempos, from the straight Exodus charging of "Living Weapon" to the more spacious and broad appeal of "Future Ages Gone" or the more clinical, mid-paced "Treacherous Tongue".

Where I didn't quite find myself in lockstep here was in the actual rhythm guitar chugging. The majority of the riffs feel very average and lackluster, not unlike the latest Onslaught album or most of the Rob Dukes-fronted Exodus releases. They sound great in production, but the actual structure of the notes just doesn't do much for me; it's walking on pretty well established ground and it seemed that, more often than not, I felt myself waiting in eager anticipation for the lead sequence since I knew it would stand out pretty far from everything else. Quite a few predictable chug patterns are strewn about the more exciting sequences, and in general I felt like they were similar to, but less exciting than those of another Californian act (Bonded by Blood) who draw on the same direct influences. I snapped a few vertebrae to their Exiled to Earth album, whereas with this I couldn't summon up much recollection once the dust cleared, even after several spins.

In closing, I will say that this is the best of the Warbringer albums I've heard to date, and the first that I've enjoyed at all, even if that enjoyment was fleeting. The guys seem to take what they're doing seriously enough, and they're wise to offer a balanced, varied record which is unlikely to bore the modern thrash fan. I feel that with a bit more intricate melody in the rhythm riff structures, or less predictable headbanging pay-outs, they are fully capable of raising the stakes among the more prevalent, larger label bands in this scene. I don't know if Worlds Torn Asunder is the album to do that, but it's angry and practiced enough to hold peoples attention until such a time that they truly hit their stride, and offer up a worthier successor to the classics that inspired it.