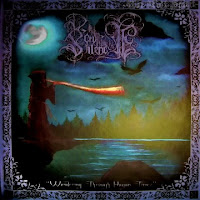 Walking Through the Eternal Tragedy was a cold sounding debut, but while I could appreciate the actual production and the wrist slitting torment of the vocals adrift over its miasma of frosted riffs, the actual composition of the music felt painstakingly average in scope, a rustic mirror of Burzum's Filosofem. Well, there's not a lot that has changed stylistically about Granath's sophomore Wandering Through Pagans Times, save that it's an even noisier, tortured clamor of strained depression than its predecessor, and to that effect more effective upon the listener's psyche. Oh, and the incorporation of female vocals which occasionally wail off against the razor strewn guitar tone and tinny, steady beats.

The intro here is quite lush, with rural samples of crackling fire and ravens set to the female vocalist' mourning, Medieval melodies. Certainly this built an enormous expectation, but once the next track arrives, "Nocturnal Silence Creeps", you are immediately returned to the frigid tones of the debut, as longing guitar melodies careen off a subdued substrate of fuzzed chords. Right away, you can tell that this will be the sort of black metal effort in which certain rhythms drone on for just too long, with no internal variation or surprises in store, and yet to Granath's credit, most of the longer pieces (many are 8 or 9 minutes) do contain atmospheric breaks and tempo shifts. Unfortunately, their presence alone doesn't always make the compositions any more cohesive, and the transitions, while not exactly clashing against one another, feel dull and uninspired in songs like "Tears of Mother" or "Forgotten Land", which is the most bloated piece on the disc...

I do like the way the album sounds, as it recalls works like Filosofem or Weakling's Dead as Dreams, in particular how the riffing interacts with Granath's squawking, screaming vocals, but there were only a few points later on in the album ("Last Tears of the Wolf", "Strength Over Weakness") at which I felt the guitars really came together for some truly sad, engrossing melodies that captured and plucked away at the emotional strings. The female vocals are sparse and well implemented through the record, and again, it's not often a band can just sound this miraculously frozen. Wandering Through Pagan Times should have been titled Wandering Through Winter Times, because you truly get the impression that you're on some solitary stride through the landscape of dead trees and ice capped hills, counting the breaths as they void the heat from your body.

It's a bit more varied and colorful than the debut, but in the end I really felt as if it still needed something to force its way deeper into the soul. Effective mood music for the late months of the year (provided you live in a temperate or subarctic area), but little more.