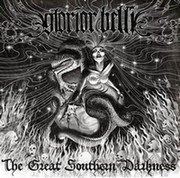 With The Great Southern Darkness, French curiosities Glorior Belli seem to have finally honed in their admixture of black metal and atonal, dissonant and adventurous rock to the intended edge. While it lacks some of the biting, acerbic treble of its predecessor Meet Us at the Southern Sign, and thus feels distinctly less 'black', it compensates with a more full-bodied production, rich guitars, curving bass and flexible drumming that give an earthen impression that you're sitting in a wooden room with the band, and that they're quite a solid block of musicians. Considering that the 11 as in Adversaries album The Intrepid Experience of Light was the originally intended fourth full-length from this lot, The Great Southern Darkness might not seem quite so experimental, but its still clearly left of center.

Glorior Belli don't go for an all-out sensual assault like their countrymen Deathspell Omega or an ambient sheen like Blut Aus Nord, but they nonetheless stand out among the French scene due to their willingness to embrace variation and influences that range from psychedelic rock to post-hardcore. Vocalist/guitarist 'J' can rasp alongside the best of them, but he in no way restricts himself to this realm, also performing a dreary clean vibe in the title track or "Horns in My Pathway" redolent of Monster Magnet's brooding stoner fix. There are still a number of pieces which fall directly within the black metal field, like the charging clamor of "Bring Down the Cosmic Scheme" or the desperate, double-bass driven tremolo breadth of "Negative Incarnate" or "The Science of Shifting", but I felt that the swerving, dissonant-tipped rock rhythms in "Secret Ride to Rebellion" or "They Called Me Black Devil" were just as exhilarating, or better yet, the junctions like "The Foolhardy Venturer" where both climes collide. The brooding, sludgy instrumentals like "Dark Gnosis" and "Per Nox Regna" are also solid.

As I might have hinted, the production is truly the star of this show. Few albums I've heard seem so organic and well balanced, allowances made for everything from the flowing bass lines to the ringing strummed guitars alongside the seething eruptions of chords. This is not necessarily a 'catchy' album, but more of an intricate, moody river that often accelerates when it strikes its emotional rapids, only later to restrain itself once more. Fleshy, innovative and remarkable rock & roll for something so nihilistic. But then, this is a band known for thinking somewhat outside the lines. Individual ingredients to their music might not feel so fresh or innovative, but when performed in tandem they feel streaming, cohesive and strangely shadowy. And you can't have an album called The Great Southern Darkness without this light-leeching quality. I'm not going to say that this is the best of their records yet, since I enjoyed Manifesting the Raging Beast quite a lot, but this is by far the most accessible and curious, without every feeling coy or trendy.