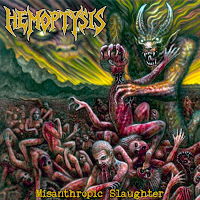 Arizona thrash metal. It's been with us from nearly the beginning, when acts like Flotsam & Jetsam, Sacred Reich and Atrophy were primed to hit the stratosphere, all more or less fading out as the genre's appeal abated from the masses (though several did enjoy and are still enjoying substantial careers). Then a little band with the name of Vektor came along and stirred up the pot with an intense and attractive fusion of technical death/thrash, and lo the masses were under their wings. In fact, I can't think of many other bands quite so viral right now, and they've ushered in an entire new wave of fans to the style (most pleasantly ignorant of the tech thrash masterworks out of Europe and the States in the 80s). Now, another group of stalwarts ready and able to wield the banner of the Tempe scene: Hemoptysis.

To be clear, Misanthropic Slaughter is not quite equivocal to Black Future in terms of its overall aesthetic and quality. Where Vektor projects itself through dystopian landscapes and the vast void of the extraterrestrial, Hemoptysis seems to long for endless siege and warfare at varied (but generally fast) paces. Misanthropic Slaughter is not quite so clinical, voracious and elegant as that other Arizona band's breakthrough, but it's still adequately explosive and energetic, and it understands the importance of incorporating strong riffing structures. The snarled vocals do remind me somewhat of Vektor's David Disanto lower register (sans the shrieking), but then they also remind me at times of brutal 80s frontmen like Schmier, Mille Petrozza and even a dash of Sabbat's Martin Walkyier. But the best thing going for this band is their unchecked ability to deliver riff after goddamn riff, plenty of variation, and good leads that very often mix up highly melodic ingredients that border on power metal.

Take a song like "Hopeless", which is strong all around, first at a mid-paced speed/thrash metal execution, and then rising and falling into a well written bridge with clean guitars, and a snaking, extensive solo sequence never short on thrills. Or "Blood Storm", which runs neck in neck with the better melodic death metal of the mid-90s (In Flames, Dark Tranquillity) and so forth while qualifying currents of groove and subtle strings of synthesizer atmosphere, with another approachable lead. In fact, let me get this out of the way: just about every instance of Ryan Miller and Masaki Murashita noodling off on this album is carefully plotted and compelling. So rarely do bands seem to spend time constructing their solos, and even if these aren't on the level of the Megadeth and Metallica classics of the 80s, in which every note would ingratiate itself to the listener's conscience, it's a damn good quality to have among a swollen crowd of generally worthless shredders in most of the other modern thrash acts.

Misanthropic Slaughter is sleek and versatile with very few faults. I can tell the Arizonans put a lot of effort into their writing, and it shows here. The production is as clean as you could expect. Gripes are minor: the vocals, while pretty hair raising at their best, do tend towards monotony and could use a greater assertion of vitriol. The cover art, titles and lyrical themes all seem a bit too typical for the genre. "Impending Doom"? "And the World Dies"? "Hopeless"? "Shadow of Death"? Nothing really stands out there. I can only imagine how much stronger the band would be with something more imaginative or unique fueling the strident muscle of their guitar chops. Also, a few of the songs seem far more entertaining than others, like "The Cycle" which just rips out at the listener in vicious, thrashing purity. In general, though, they are quite consistent, exciting, and the fact that they don't rest on the laurels of beer-addled retro stupidity in the actual composition is a huge plus. If you're seeking more grounded alternatives to modern tech speedsters like Vektor or Sweden's Immaculate, then you'll want to hear this.