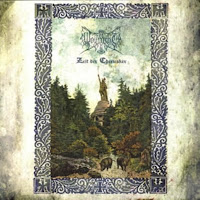 The fourth full-length album from the most Germanic Greek guy to ever stalk the Ionian Islands is a welcome surprise. Athalwolf has almost entirely kicked the RAC rock bullshit to the curb here and gone for a more natural, bewitching amalgamation of melodies and symphonic elements, not quite similar to his side-project Zofos but potentially influenced by the great work he did on that album. The sheer, raw clatter of Zeit der Cherusker is in of itself impressive, but the compositions are also formidable and flexible in their execution. Lots of layers happening throughout each, and the instruments are each improved from prior outings; even the bass, which is largely subdued, but when audible has a nice, pumping groove to it that nicely contrasts the fibrous, fuzzy guitar tone.

Wouldn't be a Wolfnacht album without a compelling intro, and Athalwolf this time merges the wartime sampling of "Krig (Berzerkerwut)" with a thundering black metal charge, eerie choir synths resounding in the backdrop while the melodies ascend straight into the tortured span of the vocals, which stretch across the melodies like a starved bird of carrion calling out to its like minded raptors in search of a lead. The lyrics remain in German, and Athalwolf uses a lot of cleaner sub-rasps which bite off against the middle paced streaming tremolo guitars of, say, "Das Lied Des Wuotanskultes" as a thing of brutal beauty. The choirs and other synths strewn about the desperate and primal mix are almost always placed at the perfect spot in the the respective track to promote glory and emotional impact, and though a lot of the guitar melodies move at a similar pace and seem molded out of the same stock, I can't think of a song here that isn't at least enjoyable.

Even the ambient/instrumental segues of the album are wonderful. In particular, "Battles in the Teutoburger Forest (Victory of the Germanic Tribes") is the very heart of the album, with walls of chords slowly ground upon a massive, panoramic battlefield while the acid of horns rings out into the vortex of lost lives and charging hooves. Seriously, this piece is fucking sweltering and staggeringly excellent, and you've just got to hear it. The finale "Der Weg Nach Walhall" is also solid, with bold synthesizers and clean, effected guitars playing out like the leaving of some storm, the graying sky slowly mutated back to its initial blue, a strange pallor cast over the heaps of dead, staring into emptiness. Wolfnacht might go ignored by the politically correct black metal majority of the 21st century weaned on Dethklok and Wolves in the Throne Room, since he has never fit their status quo, but for those seeking to surround themselves in Germanic history, long on glory, Zeit der Cherusker is an unexpected success worth experiencing, and the very best of Athalwolf's albums to date (edging out Heidentum and Lore Unfolds).