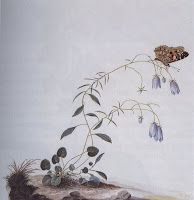 The Botanist debut is one of those rare cases of an artist's creative instinct and innovative ambitions rapidly outpacing and outclassing his ability to organize and deliver musical content. But I should also qualify that by no means should that statement dissuade anyone from at least checking out what the San Fransisco act has manifest here, an unquestionably fascinating and poetic spin on the black metal genre which incorporates the dulcimer as its central component. Combined with its incredibly interesting use of botanical taxonomy in the song titling and lyrical explorations, the scattered and disheveled chaos of the brief and sporadic compositions, and the sheer magnitude of its 74 minutes and 40 tracks, I: The Suicide Tree/II: A Rose from the Dead is at a bare minimum, one of the most unique genre offerings in 2011, despite its largely left field pollination.

As the project's proprietor proves here, the dulcimer can be every bit as whimsical, chaotic and meticulous as the guitar when it comes to arbitrating the task of nihilistic dissent. You'll likely recognize the black rasping and generally faster paced drumming as staples of the black metal medium, but alternating the spastic plucking of strings for the familiar, distorted foundation does evoke a clamorous, almost cartoon-like surreality. Songs like "Helleborus Niger", "Clematopsis" and "Dionaea Muscipula" create undisputed flights of eerie grace above their tinny, blasted undercurrents, but by no means does 'The Botanist' restrain himself to bouts of acceleration, but often a jazzy, brooding steadiness that illustrates the potential here ("Rhododendoom", or the bridge of "Gorechid"). But what's even more compelling about the material is not just its uncanny instrumentation, but the strange, apocryphal lyrics of humanity succumbing to his leafy and lichen betters, and how the concept is entwined into the remarkably charming but minimal poesy of the lyrics:

It's like A.R. Ammons writing for Attila Csihar, and that's (to me, at least) a fundamentally brilliant concept which alone deserves some fucking credit. As for the music itself, I felt that the sheer excess of available tracks here on the two albums do not always do it any favors. Most of these are brief, 1-3 minutes in length, and despite the sheer quantity of notes being hammered out, I feel like they often lack the 'riffing' money shots that make black metal what it is. Honestly, I've got no problem swapping up the instruments for something fresh and dynamic, but too often do these screwy exercises forsake their inherent possibilities to be over in a flash. Considering the tedious and prolonged processes by which shrubs, trees and certain other varieties of plant life age and evolve, it would be nice to hear a couple compositions that are more drawn out and less a burst towards the finish line. As it stands, only "A Rose from the Dead" itself, on the second disc, has a substantial duration (over 5 minutes).

That said, I'd be lying to say that the idea behind this is not in of itself worth the very price of admission, and there are several among the brief and frenetic flurries that deliver despite their short-livedness. Botanist is not the first Plant vs. Humans concept I've seen in the extreme metal phylum, as the French death & roll band Phazm covered similar topsoil with their 2004 debut Hate at First Seed, but the music is almost wholly different here, and I rather prefer the serious, bitter irony of the imagery in this Californian's lyrics. I: The Suicide Tree and II: A Rose from the Dead are about as niche as niche gets, but the formidable, flowering imagination behind them is one that should be experienced by anyone thinking outside the planter-box.