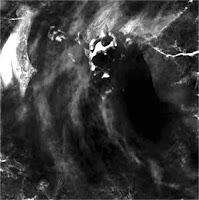 First, he implied that he was 'The One'. And now, it is 'I, Master'. Not exactly a beacon of humility, perhaps, but at least this time around, the Greek fiend has at least backed up his titles with something of some value. In fact, I, Master makes quick work of its predecessor Guardians Inhuman, both aesthetically and musically, nuking it into smithereens by the time it's first Roman numeric track has ceded to its its raging successor "II". Not to say that this is the most unique or even structured black metal recording out there, but where the debut lacked anything hinging on focus or riffing, this provides a wide maw into glaring hostility, backing ambiance hanging upon the edge of perception while the roiling mass of guitars churns its brimstone support for the hellish lungs of entity 'I' and the thundering subtext of entity 'V'.

Fuck, this album even LOOKS more foreboding. The crappy logo and cheap corpse painted presence upon the first is supplanted with a menacing figure in whose clutches is a skull, that skull howling out at the audience in obvious warning of what they will experience here. It's a bit difficult to ascertain whether this is meant to be just one single track or six independent incantations, because they stylistically correspond with one another, even if the actual openings and closures collide like dunes of human ash. Personally, I found the more ballistic compositions to be superior, like the hammering "III" and it's rasping precipitation, or the blasted girth of track "IV. But there is also something to be said for those moments at which the bitter vortexes part for ringing, vile clarity deep within "II" or the swollen "V", which is just past the ten minute mark. It should be said though that the actual guitars are not the strong point on the album. They provide an airy, spiky balance between the tortured vocals and percussion, but the riff patterns are all rather predictable.

Thus, I, Master is a work reliant heavily on its atmosphere, and in this it does succeed. You feel as if you're constantly hearing some necromancer or doomsayer howl black magical indignation at you from an active shoreline upon which black waves crash against unforgiving, sharp rocks. This guy wants to kill us all. Or at least, to make us kneel, and his morbid miasma of fluctuating, cryptic barks might just be enough to force our subjugation. The One has evolved from some amateur, inexpressive claptrap to something that uses chaos and contrast to its full advantage, and I, Master accomplishes what so few black metal recordings of the 21st century can: terror.