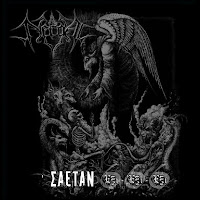 Like Deviser, Nergal are another band of Hellenic old timers back in the scene after some time off. However, in this case, there wasn't quite as long a wait. They released an astoundingly average sophomore, Absinthos, in 2006, and also took part on a split with an even more underground act (Lykaionas) a few years after that. Well, ΣΑΕΤΑΝ ΕΞΙ - ΕΞΙ - ΕΞΙ (I'm not worldly enough to have the faintest fuckin' idea) is at least a return to the straight black metal aesthetics of its predecessor, with a lot of banal blasting rhythms and consistent but uninspired sounding sneers. It sounds like a mix of the more accelerated Rotting Christ material and the Norwegian bands like Emperor and (early) Dimmu Borgir, and it's got some depth and versatility to it which stave it off from the threshold of ennui.

I feel like when the band starts blasting, I develop a headache. It's not that the drumming isn't constant and consistent, and the tremolo picking not pulled off in accordance, but it's a good example of how the brick rhythms of black metal fundamentals need a little seasoning to really capture the imagination. A lot of these sequences, in "Ταγμα της Αβυσσου", "Συκαιωνας - Αρατος" or the bridge of "Χαιρε Χαος", just don't seem to cut it. Thus, whenever the band shifts into other territory, the album almost gives a false sense that it's becoming more interesting. They do breakdowns, they do slower, atmospheric pieces with a real sense of localized ethnic notation to them ("Figura Baffometi" for one, which seems pretty Rotting Christ), and they even experiment as with the ambient finale "600-60-6", but the variation itself never manifests in anything really memorable here.

What's worse, a few of the songs are just too long for their own good. Several clock in at 7 minutes, which is not all that extensive for this genre, and yet they don't really support their weight with quality riffing and ear catching transitions. The major culprit, though is "Α - Ω", over 14 minutes of slower paced, atmospheric black metal with glaring rasps and lots of really dull and vapid melodies. Seriously, if you're writing a 14 minute song without even one instance of climax or a ripping transition, then what's the use? Nergal tries to vary itself up here, and that's not a negative. There is a hint of both mystery and eloquence, and I also admire their sticking to Greek themes, language and symbolism, but I'm afraid this was easily my least favorite of their works, and I'll be sticking with The Wizard of Nerath if I ever need a fix.