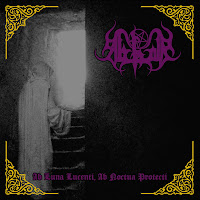 Though they've not yet amounted to more than a blip on the radar of most frenzied occult black metal fans, Italians Abhor have actually had a fairly long run of it, formed in the mid 90s and starting to release full-lengths about the dawn of the new century. Lyrically they're like a more Latin-obsessed version of Mortuary Drape, but the music is quite a lot different, a smattering of orchestral black metal aesthetics with the incorporation of synthesizers that feel as if they belong on some archaic prog rock record lost in the 80s. Note that I'm not complaining, though, because this is what actually makes Ab Luna Lucenti, Ab Noctua Protecti stand out among the many similar works in the field, this amalgam of early Emperor, Ancient and Dimmu Borgir with its airy, otherworldly excursions.

The riffing is generally pretty standard, with streams of climbing and falling chords offset by melodic tremolo sequences, all slathered in efficient if common rasping. Without the synths and pianos almost constantly hovering above the cryptic din, it would feel rather one dimensional and forgettable, but fortunately the ingredients all blend together into a dynamic, appreciable jaunt into the annals of occult mystery and haunted castle loneliness. I tended to enjoy the more spacious, slower tracks like "Echoes of Desperation and Hate" or "De Vermiis Mysteriis", which feel more intrinsically evil than their faster counterparts, but Abhor proves numerous times here that they can accelerate with solid results. To be completely honest, though, I though that the most haunting moments of the album came upon the finale, "Aura Ignis Aqua Tellus", with its subtle winds, tranquil acoustics and bestial, overbearing vocals. It's so bewitching that I wish the band had spent more time off their beaten path.

As for its appearance and production, the album delivers on both accounts. The gilded corner frames and psychedelic resonance of their purple logo feel incredibly underground and 90s, and the way the album is engineered seems as if its also intended to breed nostalgia for those halcyon years of infernal expression. With a good balance of instrumentation and a lot of varied pacing, Ab Luna Lucenti, Ab Noctua Protecti offers a broader picture than many other albums in its field, but it's not the sort of effort where you experience a lot of unforgettable riffs or individual, standout tracks. Instead, I'd recommend it for those who seek a zephyr of antiquity, a breath of the past lightly licking their eardrums with a sharp and tempting tongue braised in secrets and sorcery. Not at all brutal, or overpowering, but almost delicate in its demonic suggestion.