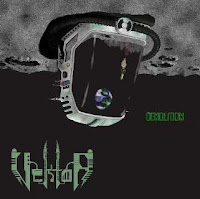 By now, the whispers surrounding Arizona's Vektor have upgraded to a chorus of roars. It's hard enough these days to find a good band taking thrash metal seriously and not just taking the piss for a chance to get laid and high in their carousel of hi-top retro fashion and Hot Topic love affairs, but Vektor were a lot more than just good. Their 2009 sophomore album Black Future was an astonishing, cohesive glimpse at what made technical thrash of the 80s so good, and nostalgia for the mightiest works of Coroner, Watchtower, Deathrow, Atheist, and Voivod came crashing over me like currents of warmth and sanity among the shills and snake oil salesmen that have somehow throttled themselves into popularity through persistent touring and fucking off.

Demolition is not Black Future, of course, and it's really just an ad hoc, self released debut album pooled from the band's 2003 Nucleus demo and some additional material. Some of the tracks do appear on Black Future, namely "Oblivion" and "Destroying the Cosmos", and they sound much better there, but fans of the band's schizoid, dystopian dementia would probably enjoy this for the material they haven't heard. In particular, I really like the track "Venus Project", which had appeared on Nucleus and rifles through a number of hyper riffs and tranquil bridges, both of which manifest enormous curiosity. The other center piece here is the heavily Voivod influenced "Moonbase", a 13 minute epic that plods for an infinity into some eerie, alien depths. "Testrastructural Minds" and "Fast Paced Society" also earn their keep through faster riffing and psychokinetic intensity, but otherwise the album is just two instrumental shorts ("Spiral Galaxy" and "Infiltration") and the tracks that will re-appear on Black Future.

The sound is obviously not so pro as the band's later gestation would allow, but it's more than decent enough for amateur thrash, especially when played at this level of conviction and ambition. In particular, I feel like David Disanto's vocals here are only a pale shadow of what they'd develop into. He still evokes that impish quality, but his screams are pretty bad where they appear, and he's not yet the manic snarling equivalent of a Kelly Schaefer or even Chuck Schuldiner. The drums also feel a little less powerful in this particular mix, though the original drummer was still pretty good, with some obvious jazz in how he concocts the percussion for the more unusual segments of tracks like "Moonbase". The lyrics are ponderous and analytical as you might expect, similar to Death after they jumped ship to their more 'progressive' album, or a lot of the philosophical thrash bands of the 80s (Deathrow's Deception Ignored, or Coroner), but they also create a lot of stark, violent imagery. In the end, Demolition is worth hearing if you already enjoy Vektor, but start with Black Future if you're new and want to be blown into atoms.