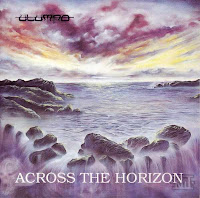 Another of the long silenced voices of Swedish death in the 90s, Utumno were a band which few would argue had the potential to rise to prominence, yet for whatever reason failed to do so. Yes, for every At the Gates and Entombed, there were a dozen, hungry young groups of filthy Swedes wishing to snatch the cookie from their mouths, and this band could damn well have done so, had they made it beyond this EP. Culling both tracks from The Light of Day single in 1991, Across the Horizon is exactly the sort of statement a budding death metal band should make on the underground: tightly executed, raw old school appeal, resonant and torn vocals, and an awareness for atmosphere and subtle details that adds a timelessness.

"The Light of Day" itself, which strangely, was not one of the tracks from the single, showcases the band's morbid, drudging riffs and glints of somber melody, all within the first moment, and Jonas Stålhammar's vocals open up like an infernal mirror of Possessed's Jeff Becera waltzing with Lars-Goran Petrov in HELL. The bridge is intense, with wild, fibrous fuzz to the rhythm guitar and baleful, blistering leads, and the old school riffing in the end moment will tear the heads off fans of classic Death and Autopsy. "I Cross the Horizons" is a dire, melodic piece that shifts into bustling grooves, easily the measure of most At the Gates material, while the savage "In Misery I Dwell" and Entombed, doom-laden swagger of "Saviour Reborn" (both from the single) cement the band as something more than a mere wanna-be. "Sunrise" is a little sloppier, with a tranquil intro and a rather cancerous slew of riffs that never amount to much until the melodies deep at its heart, and "Emotions Run Cold" is a fairly straightforward death piece in the vein of Morbid Angel with severe, thrashing roots and another glint of melodic atmosphere.

Across the Horizon certainly starts off on its best feet, and then manages to maintain its level of consistency for some time before the uneven "Sunrise" arrives. I feel like that track might have been refined or simply cut for a better overall experience, but at least "Emotions Run Cold" awaits as compensation. The tones of the EP are stubborn and eerie in true 90s fashion, like a Left Hand Path or Life is an Ever Flowing Stream, and sure enough, these are the bands that most closely influence Utumno, though they've clearly educated themselves on their Floridian precursors. Potential this had, in spades, but I wouldn't say that the EP is some indispensable classic of its own right. However, f you're seeking out early, well written examples of the Swedish style, then this certainly makes the cut, along with Gorement, Uncanny, and numerous peers, and you'd do far better with this than many of the 21st century retro worshipers.