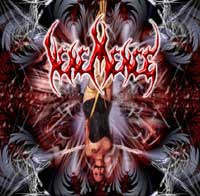 Vehemence is a band that was highly cited by my circle of metal friends in the early years of the 21st century as one of the most promising in emergent death metal, but their material has never left an impression on me for long, so I've decided to turn back time and re-examine their albums to see if my reaction has changed. They've since run their career on a roller coaster trajectory, signing to Metal Blade records for their rather well received sophomore God Was Created, dropped mid-decade, some of the members escaping to Abigail Williams, and then reforming a few years later to give it another go, which has yet to bear its inevitable fruit.

The Thoughts From Which I Hide, on the other hand, was a debut that showcased only a few traces of what the band would evolve into come 2002. Vehemence are often described as a 'melodic death metal' band with a difference from most European acts that explore the style, but that isn't very accurate for this record. For the most part, it's your standard mesh of old school and slamming elements simmered in a crisp, popping mix where the rich guitar tone is heavily slathered in the (perhaps too loud) grunting and barking, the drums given a grooving feel through the snap of the snares and the beats they're usually meting out along to the many chug slams of the album. For a self-released, limited run like this, the album does have a pretty clean production, though I think at times it might seem a little too tidy, gimping some of its guttural lethality.

A few of the songs definitely have some potential, like the rape/murder fantasy "I Take Your Life" which flows with some clinical riffs that draw comparisons to a mix of Cannibal Corpse, Suffocation, Deicide, and Pestilence. The band shows a willingness to cycle through varied dynamic climes, but they usually end up at a slow, trudging groove, perfect for the unassuming, die hard devotee of brutal USDM and slam, but not all that interesting for the rest of us. Chug and squeal, rinse and repeat. "Whore Cunt Die" once again services the band's love of the finer sex, the soundtrack to a pseudo-Mother Mary molestation and sexual crucifixion performed by a religious freak, which has a decent, catchy melody to the mute-stream of the verse. Sadly, this too turns into mediocre mosh grooves, and it's a pattern used all too often here, so even when the band decides to thrust at a higher velocity ("What You've Become" or "Devour the Rotten Flesh"), you know what you're in for eventually, 1-2 decent riffs among a herd of misfires.

The lyrics foster the same interest for misogyny that one will find in the entire strain of Cannibal Corpse style bands, though to be fair, the Arizonans do it with a more personal 'touch', trying to jump inside the mind of the killers and rapists they examine with lyrics that would very well disturb anyone not in the know to the genre. The atmospheric flourishes used in the 11:26 closer "Reconditioning the Flock" are quite surprising. Synthesizers, clean guitars and the criticism of religious sheeple all seem to handle well there, but it's too late to save the uneven contents up to that point. The Thoughts From Which I Hide is hardly more lamentable than many death metal albums at the turn of the century, but it's well outside the realm of those albums worth tracking down for their musical value, and disappears all too quickly from the conscience despite its grisly lyrical fixations.