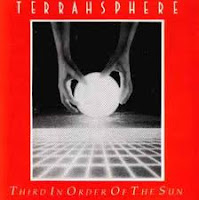 Being that I grew up in the Massachusetts end of the Merrimack Valley, the name Terrahsphere was one passed around quite often in my later high school years, since they had landed a deal with New Renaissance Records, a small time metal label that had a colorful if ultimately ineffective roster. I had been in heat over a few of their bands, like Hellion, At War and Indestroy, so it was great to see a local band joining the fold, and since the band were from nearby in New Hampshire, there were several local connections that insured access to their demos. What's more, Terrahsphere performed a pretty interesting take on technical thrash/speed metal which I had been a major proponent of for years, delving into the beautiful works of Realm, Mekong Delta, Toxik, Artillery, Watchtower, Deathrow, and others.

Well, I'm sad to say that Terrahsphere had nothing on any of these bands, but they gave it their best when it finally came around to the release of Third in Order of the Sun. This is frenetic, insane thrash metal with technical riff patterns that weave up and down the fretboard in accordance with the schizoid vocals of Frank Sarcia. Sarcia would shift between early Slayer or King Diamond screams and then a mid ranged, barking asylum escapee, and while I can't say it works 100%, it definitely made them fun to experience. The musicianship of the band, on the other hand, is far more consistent, and though the production of the guitars doesn't do the record much justice, Kevin Kelly was clearly adept at formulating busy passages that drew the listener into the vortex of paranoia the band created through their heavily sci-fi lyrics.

Yes, I was very pleased that the band included all the material from their 1989 Portrait of Kaos demo here, since these were songs I had been listening to for years. They're also remarkably the best on the album, led off by the hustling "Inheritance" with its mad flights of bass guitar and some of Scarcia's most incredible vocals. "Time Corridors of Planetterrah" begins with an alien ambient intro, before the sporadic battery begins, start/stop verses and more of those freakout vocals that made Atheist seem tame by comparison. "Scigoreality" feels like a swarm of extra terrestrial insects dancing across your face while they impale you and draw samples from your liquid essence, and "What Was And Will Be Again" provides an epic closure. Unfortunately, the newer material on the album was just not that great. "Re-Emergence of Atlantis" and "Plan of Observation" continue the technical bass and guitar lines you would expect, but they feel more restrained, at times almost relaxed by comparison to the demo material. I'd say the rush of the anthem "New Clear Day" was the best of these.

Terrahsphere never amounted to much, which was pretty depressing, as they had been plugging away for years, and clearly had a crazed approach to the style that we all would have enjoyed if they had taken time to hone their chops, acquire a better budget sound and perhaps a few more memorable individual riffs. Intensity was not the issue, and I feel like fans of the first Watchtower album Energetic Disassembly, or the obscure Russians Aspid would do well to track it down and give it a listen. Their label folded and this is no longer easy to attain, so use whatever means are available. Surprisingly, this was not the only local band doing the tech thrash style, we had a Massachusetts group called Atomicaust, who were pretty spectacular and also never got very far. But despite its flaws, Third in Order of the Sun is an album I'll not soon forget, thanks to the manic composition, geek friendly subject matter, and most of all, the bipolar, frenzied phonetics of its frontman (who, might I add, still loves metal).